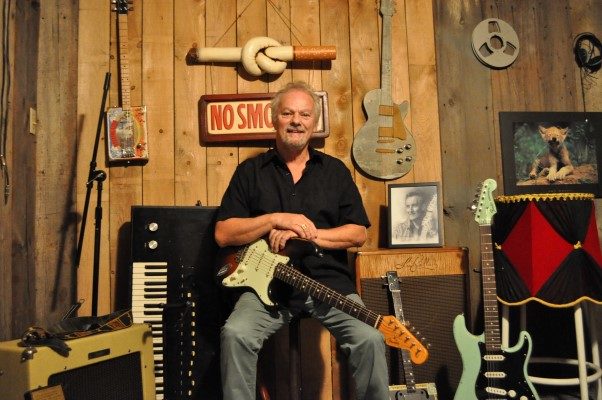 Myles Goodwyn is most likely a name that you’re familiar with if you followed the Canadian music scene at any point in the last 40 some odd years. Not only is he an amazing writer, producer, and guitarist, he is also the frontman and founder of Canadian hard rock legend, April Wine. You would be hard-pressed to find a fan of rock music that hasn’t at one point or another heard a song penned by Goodwyn, and to continue that tradition, he is releasing his latest solo album Myles Goodwyn and Friends of the Blues on March 2nd, 2018. We were honoured to ask Goodwyn a few questions about his newest release and more.

Myles Goodwyn and Friends of the Blues definitely deserves its title with a very clear and prominent blues influence. What made you decide to put out a blues album when much of your career was steeped in rock?

I`ve always enjoyed well-written blues tunes and great singers and of course great players. Taj Mahal was a big influence on me with his album The Natch`l Blues in 1968. The songs and the voice and the band resonated with me and still does. I still have that record in my collection. But I was a rock/pop guy and I focused on that genre most of my adult life. And then I had a near-death experience in 2007 when I had internal bleeding. I spent several weeks in hospitals and then a long time in rehab. It changed me and it reminded me that life is fragile and so when I was well enough I decided to write that blues album I had wanted to do for years. It took 10 years to finish.

Is there much of a difference writing a blues song rather than a rock song? Did you approach them differently at all?

Very differently. As a seasoned writer of words and music, I know how to craft a song and how to arrange. That experience was invaluable and with the blues material I wrote for this recording, the main difference was that the lyrics were more important to me than a lot of the pop songs I`d written in the past. I was more deliberate over every word and every phrase, I wanted perfection, I wanted great lyrics with no “filler.” And I focused on sincere emotions and real-life experiences and it to be reflected in the words and the mood of each piece. Even with fun tunes like Cardboard Belt, each line had to be as good as I could make it.

April Wine is a quintessential Canadian rock band, were you worried at all that the fans of the band wouldn’t embrace your solo material?

No, I wasn’t worried at all. I’ve been around a long time and I’ve been lucky and quite successful, selling over 20 million records over the years. These days I record for me, no one else really, and that`s a good and healthy thing, mentally. And I’ve earned the right as an artist I believe to follow my heart. I have had great support from fans no matter what I tried and I appreciate that very much by the way.

What are some of your inspirations behind the new album?

That requires a very long answer so let me say that people in-particular inspired me. Fats Domino on the song “Tell Me Where I`ve Been (So I Don`t Go There Anymore)” his influence is obvious when you listen to the tune. Kenny Blues Boss Wayne’s piano playing is great on that track.

On, “Good Man (In A Bad Place)” Canadian blues great Dutch Mason was the motivation for the lyrics. His son Garrett does a super job on guitar exchanging leads with me. Personal heartbreak is definitely inspired tunes like Nobody Lies About Having TheBlues and Weeping Willow Tree Blues. I Ain’t Gonna Bath In The Kitchen Anymore was based on experiences growing up poor in rural Nova Scotia.

I also recognized that the blues can be fun and have humour and I incorporated that idea in “I’ll Hate (You Till Death Do Us Part)” and “Cardboard Belt”.

What can your fans expect from the new album?

Good tunes and some great playing by blues “friends” from Canada and the U.S.

What was it like working with artists like David Wilcox, Rick Derringer, and many more of the friends you brought to your album?

It was really great, they were very generous with their time and they shared their unique talents with some inspired performances. I`m very grateful to everyone that performed on the record. It’s the collaborations that really makes this project stand out in my opinion.

Are there possibly more solo albums in the works for the future?

Do you have a favourite song off of the album?

Always a tough question. Not sure yet.

Can fans expect a tour alongside this album?

Yes sir, looking forward to it.

To the fans, I say thanks for the support you have given me and my music over all the decades and for being at my side through the good and the bad times. I love music with all my heart and soul and I`m thrilled to have a new offering with this blues project. Peace.