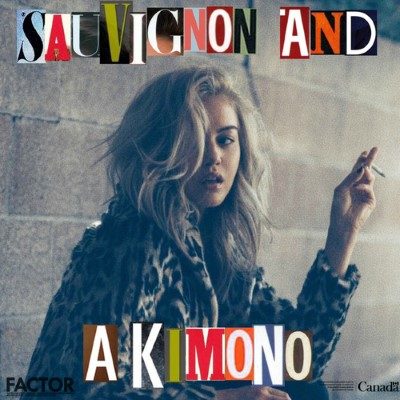 DYLYN is an artist from Toronto, Ontario, who released the pop album Sauvignon and a Kimono on February 23rd, 2018.

The album opens with “American Nightmare,” which is catchy and radio friendly. It sets Sauvignon and a Kimono off on the right foot, highlighting DYLYN’s strong rock vocals and ability to write hooky melodies. It’s danceabl, yet tough and impossible to skip over.

The song “Mimosa” is an equally as catchy grunge-pop track, featuring the lyrical hook “When life gets too serious/I’d rather swim in my mimosa.” The song, like many of DYLYN’s others, would fit perfectly on a Halsey or Bebe Rexha album. There’s also a gorgeous acoustic version of the song available on Spotify.

The title track “Sauvignon and a Kimono” is so driving and upbeat, it’s not at all hard to imagine it playing under a montage in any action movie.

The album closes with “Sober,” showing DYLYN’s strong lyric writing ability, with gems like “You never paint me like your French girls/You’re just too much of a gentlemen/Always have me home by ten” and “Why do you only call me when you’re sober?” This song sounds nostalgic in the best possible way.

DYLYN has stated online that this album took two years to create, and I think it was worth every minute. Riddled with alluring synths and enticing vocals, Sauvignon and a Kimono is a collection of seven tracks, each one better than the last.