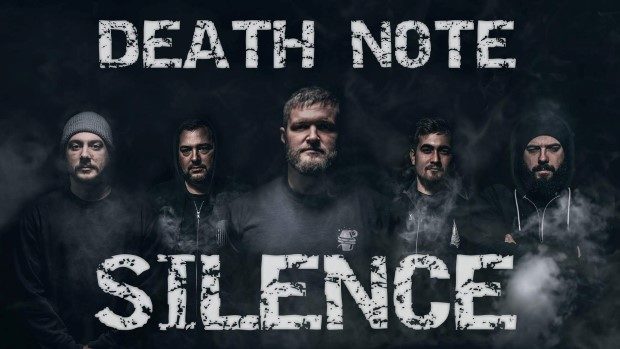 Quebec based 5-piece Metal/Hardcore band, Death Note Silence took some time out of their schedule to chat with us for our newest segment of Five Questions With. The band is about to head on tour with Throne To The Wolves, find the dates below and if you have a chance, check them out!

We are Death Note Silence, we define ourselves by a very aggressive style. It’s a mix of good old hardcore, metalcore, and deathcore without that mainstream particularity we know today. We have an album named Code of Silence available online on every known platform such as iTunes, Google Play, etc. Our 2nd album is on the way and should be released before the end of 2018. Not only do we want to reach the industry standards but exceed them and innovate without having to copy a style that has been done over and over again.

We all have different musical tastes. Our main concern is to mix everything in order to obtain an original and brutal product. We write and deploy a lot of energy to do it. If the new songs do not give us chills when we play them, they do not deserve to be played.

We have a lot of gang vocals which tells a lot about our interactions with the crowd. When we play, we have that connection together and we invite everybody to connect with us. Every show is happening, it’s all about sharing with the crowd.

“Prologue of a murder”

Obliterate, AngelMaker, Despised Icon, Becoming the Bully, Above the grey, Feels like home, Behind the Revolver, A Life Forsaken, Unfinished War, Northwalk, there are a lot of other bands we love, in fact, there are too many hahaha