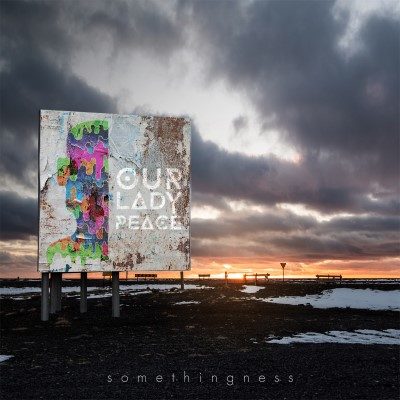 Canadian alternative rock pioneers and indie rock innovators, Our Lady Peace, have returned with their first full-length record since 2012’s Curve.  Initially, the band planned to release their ninth record, Somethingness in the form of two complimenting EP’s- the first of which was released in the fall of 2017 and was the first recorded work to feature current drummer Jason Pierce following the departure of long-time drummer Jeremy Taggart.  Now, rather than release the second half of the record, Our Lady Peace have released Somethingness, a full album that includes the four tracks from last year’s EP, along with the five songs that likely would have been used for its follow up.

Our Lady Peace open the record with “Head Down”, a throwback to 2000’s mainstream rock reminiscent of The Fray, making the song an odd choice for an album opener.   It is in no way a bad song, it just feels less exciting of an opener than one would expect. While instrumentally, “Head Down” feels very middle of the road, lead vocalist Raine Maida shines with a vocal performance that is full of conviction that is rooted in the smoky undertones of his voice.  “Nice To Meet You”, the most recent single for the record, on the other hand, is a much more interesting track that blends electronic textures with the full performance force of the band.  Unfortunately, however, much of the tracks that follow tend to return to the middle of the road, in tone with the album’s opener.  Songs like “Ballad Of A Poet”, “Falling Into Place”, and “Let Me Live Again” feel less adventurous and exciting than one would hope.

That being said, there are three tracks on Somethingness that truly stand out. The first, “Drop Me In The Water” is a bombastic throwback to the band’s early work. Driven by a slinky guitar riff, the song is incredibly rhythmic and bouncy.  It has a swagger to its step as it slowly builds up to an incendiary guitar solo from Steve Mazur.  The following track, “Missing Pieces” takes the energy down to a slow, melancholic pace that blends acoustic guitars with electronic textures and a subtle but thrilling slide guitar.  Finally, the closing track of Somethingness, “Last Train” is the most alternative and experimental track on the record that thrives on a level of creative quirkiness that made Our Lady Peace a powerhouse amongst the diverse 90’s alternative rock scene.  The song is completely unexpected but welcomed as it ends the record on one of its strongest notes.

Somethingness is a very safe record that is careful to stay in its lane. Gone is the sense of danger that fueled tracks of the likes of “Superman’s Dead” and “Naveed”; instead Our Lady Peace feels as if they are chasing the trends of today in a way that they have never done.  Despite this, there is still a sense of defiance in their blend of indie rock.  For starters, they are still a band in the traditional sense; they are driven by intricate guitars that feature an array of textures, pounding drums, and Maida’s roaring vocals.  In this respect, they stand as strong members of the old guard, those who shifted the direction of modern rock through their output in the 90’s, Somethingness may be safe, but it has an air to it that is the antithesis of modern indie rock. Whether you read into it at this level or not, Somethingness is a solid record that justifies the relevance of Our Lady Peace, twenty-six years later.