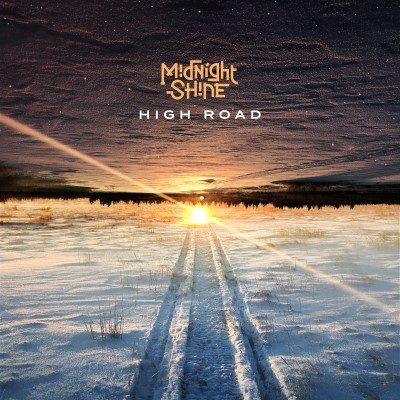 Hailing from James Bay, Ontario, Midnight Shine has returned with their third full-length record.  High Road picks up where the band left off on their 2014 sophomore release, Northern Man as the band’s momentum only continues to grow.

Opening with “Leather Skin”, Midnight Shine start their record on a solemn and serious tone with a ballad full of conviction and resilience. Slow, soft, and yet strong, lead vocalist Adrian Sutherland’s words and smooth vocal timbre carries a sense of weight to it that demand’s the listener’s attention.  The record then picks up the pace with “Cold Walker”, a modern rock tune that solidifies the band’s identity in relation to some of Ontario’s, and Canada’s for that matter, top modern rock outfits.  Songs like “High Road” and “Lonely Boy” carry a hint of indie rock and a touch of pop to them, giving the band a unique blend among the popular rock of today.

In a bold choice, the band pays tribute to one of Canada’s greatest songwriters and folk music’s greatest innovators, Neil Young.   Their cover of his 1972 hit, “Heart Of Gold”, is stunning and not only links the group to the folk roots of rock and roll but also highlights the group’s Indigenous heritage through the vocal styling and with the final verse being translated into Mushkegowuk Cree.  The track is not only a definite highlight among High Road, but also holds up to the original, something that has only been done previously by Johnny Cash – backed by The Red Hot Chili Peppers- on his Unearthed collection released in 2003.

Midnight Shine continues to prove their worth on High Road.  With an excellent collection of ten tracks, this is a record that fans of indie and popular rock enthusiast must hear as it highlight’s the band’s ability to blend an array of modern and retro styles to create a record full of excellent performances and songwriting.