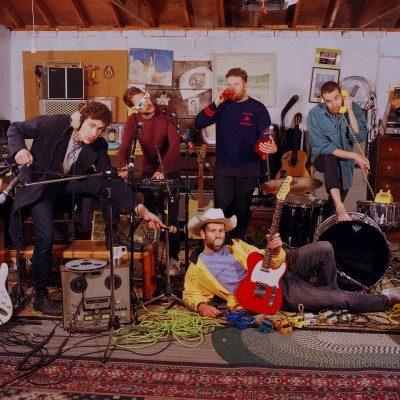 Grounders home base is in Toronto, Ontario but claims their newest LP Coffee & Jam extends it even further. The 5-piece released their highly-proclaimed LP on the 23rd of February and I was lucky to get an early copy, and I can say, I was insanely surprised.

As soon as I started the album, the sounds from this 5-piece surprised me. I started dancing in my chair, no joke, with the pop-influenced background and the quick flow of the guitar.  “Mickey Can’t Move” followed by “Bringin’ It In” introduces the album in a way I can’t explain. It was so quick and catchy that it made me excited to hear the rest of the album.

“Used” slows it down, similar to Broken Social Scene or Silversun Pickups. It doesn’t throw the album off at all, as it’s a surprising addition to the album. “Scum For You” picks up where the last song left off, only increasing the tempo slightly, making both songs blend well together.

“Perfect” was the first single that was released from the new LP. It has an 80s/90s pop vibe as I can hear traces of The Police and Simple Minds. This song could be a great background song for any scene in a “coming of age” movie. “The Judge, The Cook & The Clown” is an interesting name, but the drumming intro is more interesting. It’s a fast, rhythmic joy that leads into a mellowed out party song.

“Fixer and the View” closes off the album with a psychedelic sound and beautiful, clean lyrics, similar to MGMT. I can’t describe the sound of this band as they have hints of any band I’ve mentioned earlier and more.

The unique sound of the Grounders sets them apart from anything you’ve ever heard. The vocalists deep, natural voice, mixed with the bassist’s perfectly honed skills, followed with the keyboardist, guitarist and drummer all mixing perfectly together, this LP is a great release for anyone wanting to experience something they’ve never heard before.