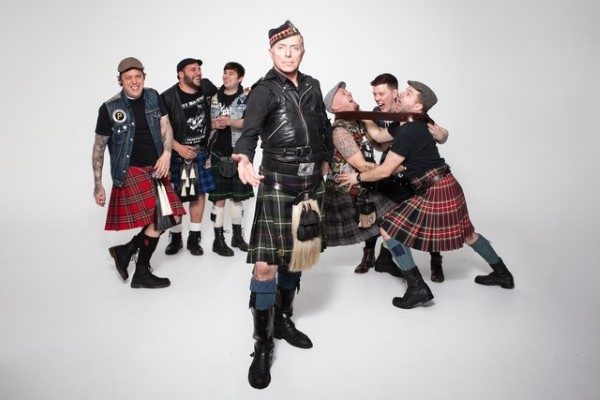 25 years, 10 albums and more live performances than many Canadian bands could only imagine, The Real McKenzies are the definition of living the dream and having all the fun doing so. Are they Celtic? Punk-rock? Poets-of-sorts? Let’s go with all of the above…and more.

Take a second and imagine yourselves back in the early 90’s. What are the top three things you would want your current selves to give the earlier versions a heads-up on?

Not being so drunk and disorderly all the time. Not taking life so seriously. Touring more.

Getting ready to tour in support of your 10th album, “Two Devils Will Talk”, are there any touring traditions you’ve stuck to over the years?

Yes. Keeping the van on the road, taking lots of non-perishable food, and drinking as much as humanly possible.

Having had the chance to tour with, to name, but a few, NOFX, Rancid & Metallica, are there any newer acts that you’d love to get together with?

Most are DEAD! MC5, Stooges, David Bowie. But seriously, there are so many great acts we would be happy to play with. Gogol Bordello are amazing. We’d love to play with them again. One of the most entertaining bands working today. Any of our FAT Wreck brothers and sisters as well.

Touring in Canada, the US, Europe and elsewhere…is there anyone similarity between those coming to your shows, no matter where?

Yes, we have been all over the world and one thing we have found is that our fans new and old, junior or elder are so very cool and nice to party with.

Speaking of the new album as well, there’s a definite theme of just living life and living it the best you can. Is this an attitude you’ve always had or something that has come with experience?

We Real McKenzies have always felt this way. It draws positive energy our way and we like that a lot. Life on the road often leads to new adventures and experiences. We love rock and roll.

What are you most looking forward to in the next six months?

I’m sure I can speak for the band on this one. We are looking forward to six months of being squeezed in a van for thousands and thousands of kilometres, being searched at each end of all of our flights by suspicious undertrained airport security, hanging around a lot and… oh ya!!! Did I mention playing excellent music with a fantastic band? On behalf of the band and myself, I wish to invite one and all to our shows for a raucously great show.