Five Questions With Screaming At Traffic 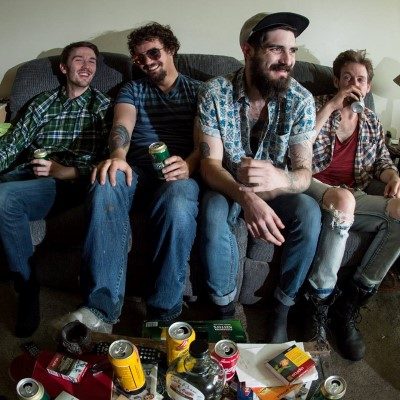 Winnipeg, MB’s own Screaming At Traffic is the latest project from longtime friends and on-again-off-again collaborators Jacques Richer, Duncan Murta, Paul Colman and Stefan St. Godard. The four musicians are about to set off on a Western Canadian tour this march, check out the dates below, and find out more about the band via our Five Questions With segment. 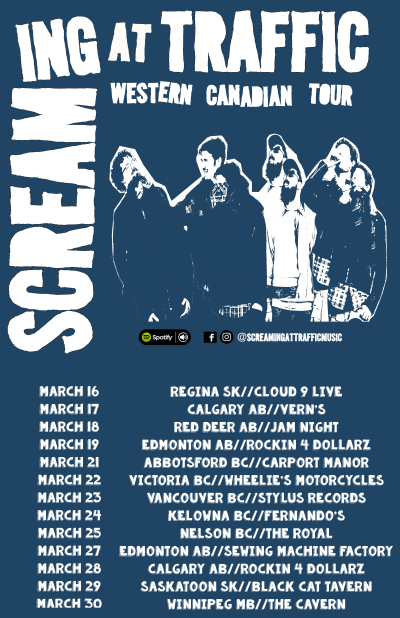 My name is Duncan Murta, I play guitar and sing for Winnipeg based punk band Screaming At Traffic.

We play melodic punk, it could be called emo punk. We have a lot of moving parts in our songs, we like to play with a lot of guitar/vocal harmonies and interesting chord voicing. Jacques (our other guitarist/vocalist) and I each individually bring songs we write to the band, then they get chopped to bits and put back together by the rest of the band. We’re very collaborative in our writing so even though two separate people are writing songs, it always sounds like Screaming At Traffic.

Do you have any upcoming shows? For someone who has yet to see you live, how would you explain your live show?

Locally we’re playing with Greg Rekus at the Windsor February 28th and going on tour out west mid-March. We’re really high energy and like to interact with each other and the crowd. I really love when someone hops on stage to sing a cover with us, or when a band member hops off stage to jump around with the audience. Really, we just have fun performing and want the people at our shows to enjoy it as much as we do.

I’d suggest “Monstrosity” off our S.A.T. Ep, it’s the first song I wrote for S.A.T. You can find it on YouTube and most streaming sites.

There are so many awesome bands coming out of Canada right now, I’m going to stick mostly to punk to keep it simple. A few of my current favourites would be PUP, Mobina Galore, Propagandhi, Sit Calm, Potato Rocket, The Penske File and the Flatliners.