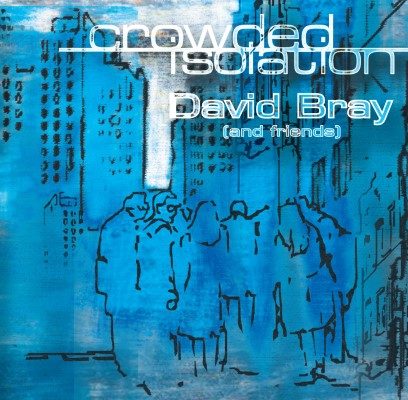 Toronto based singer/songwriter David Bray has been hailed one of Canada’s leading songwriters. His newest album, Crowded Isolation was released earlier this month via Under Duress Music. It’s the second in a trilogy of albums, following Night Rains which was released in 2017. The Albums feature a plethora of Bray’s friends, including Jeff Healey, Daniel Lanois, Garth Hudson of The Band, Kim Mitchell, legendary Motown bassist Bob Babbitt, Justin Abedin of Jacksoul, Colin Linden and many more. We had the chance to ask David a few questions about his music career and album, and what may come in the future.

Crowded Isolation has quite the roster of featured artists, what was it like working with so many prominent and strong individuals from the music scene?

Quite exciting. All of the players have worked on outstanding material. At heart, I remain a fan …..so sitting talking to Bob Babbitt talk about playing with Marvin Gaye, Stevie Wonder and Phil Collins or talking to Garth Hudson about recording “The Weight” or being flown to the stage of the Woodstock festival by helicopter is interesting to say the least. Even better is having them respect me enough to work with me on fleshing out my songs.

How does Crowded Isolation compare to Night Rains?

Crowded Isolation is pure R&B, modern with echoes of classic R&B and Soul.

I have a few great vocalists featured on that album, most notably Lorraine Reid. If you want to hear a great voice, she is it. I handle most of the vocals on Night Rains which is a mixture of Roots, R&B, Blues and Soul. Most importantly the lyrics from both albums are related … collections of poetic stories, conversations, experiences and observations set in an urban environment. The lyrics are very important to me; a point of difference compared to other R&B/pop songs.

When can fans expect the third installment?

Can you give us a hint of what to expect from the next part of the trilogy?

The third album is entitled Land of Extremes. It contains, among other things, Garth Hudson playing on a song that echoes The Band in a tribute to Canada. Overall the album is closer to the sound of the first album with the some of the second mixed in.

What inspired you to release these albums after all these years of work?

Of course artists often want to keep editing and refining. They don’t want to let their baby go. A little less than two years ago I was diagnosed with cancer. While recovering from that, I came down with epiglottitis which left me in a coma for about a week. I thought I better get going or risk having the entire collection left behind as my epitaph.

How would you describe Crowded Isolation to someone who may not be familiar with your work?

I like to think of my approach as lyrical flare combined with an ear for musical hooks. Musically there is a debt to Motown and contemporary R&B. Lyrically, I have been inspired by Leonard Cohen, Joni Mitchell, Bruce Cockburn and the poets Margaret Atwood and Evelyn Lau. The goal is to create the emotional impact of Motown/Soul with thought-provoking lyrics that you wouldn’t have expected.

How do you decide which songs to put on each of the albums? Were there any that didn’t make the cut that you wish they did?

The musical style largely dictates which album a song appears on, although there is certainly some stylistic overlap.

Do you find it difficult to get your music and message out there without touring?

Certainly more difficult, but Steely Dan did it. Given the poor state of my health over the past two years, it was necessary. I’m feeling good now, so let’s see what the future holds. I have spoken with everyone about doing some shows.

With the amount of work and years you have put into the music industry, what’s one piece of advice you would give someone wanting to get into the industry themselves?

Do what you love and create music that you would like to listen to. When it comes to making money and supporting a family, find a related field that is satisfying. For example, I have worked for many years in advertising and as a radio consultant.

Not surprisingly, I love radio.