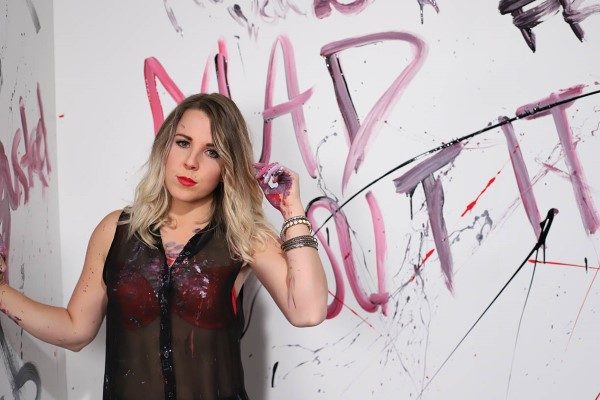 Lisa Nicole is an award-winning Canadian country musician, who recently released the single “Mad About It.” The song comes from Lisa’s EP, Come Find Me. Canadian Beats got the chance to ask her some questions about her music while Lisa was on tour.

Tell us about being invited up on stage to duet with Keith Urban. How did that come to be and how has it impacted your career?

It felt like something straight out of a dream! The day before the concert, the hotel shuttle driver mentioned that Keith Urban was doing a pop-up show at 12th and Porter. I signed a CD to him while I waited in line, called mom and said “Mom, Keith Urban is playing a pop-up concert tonight. I’m going to sing with him… he doesn’t know yet, but I’m gonna ask!”

At the show, I made my way through the crowd to the front of the stage, waited for a quiet moment and basically said “Keith, my name is Lisa Nicole, I want to sing ‘We Were Us’ with you” and he said “This is you? (pointing to the CD) Come on up!” The rest is on YouTube!

It definitely inspired me to persevere and confirmed my way of thinking that if you put your mind to something, you can make it happen. I had some good publicity from it too!

What is your favourite lyric from a song you’ve written?

Oh, great question! There are so many lines in my current single “Mad About It”.

I love the whole second verse “Your will, her clothes, last night they came undone. I’ll powder my nose, with the powder from my gun.”

How long have you been singing? Do you play any instruments?

I’ve been singing since I was young.

The first time I sang in public was at a karaoke restaurant at age 9, but I have memories of sitting on top of my dresser with my tape player singing along to Martina McBride.

At age 15, I started going to bars to sing. My parents would escort me on and off stage to sing. At this one bar, they had a hotel upstairs, so I would go upstairs between sets and do my homework!

I do play acoustic guitar and piano. The guitar is self-taught and I learned basic piano when I went to music school. When I was around age 12, my mom enrolled me in piano lessons but I hated them… kind of ironic.

Who are some of your favourite Canadian musicians?

Shania Twain and Justin Bieber are two of my favourite artists, and they happen to be Canadian.  A lot of people say I sound like Shania Twain, but I did listen to her “Come On Over” CD on repeat when it came out. And Justin Bieber is so talented – musically, vocally and his songwriting.

What’s some valuable career advice you got while attending Selkirk College of Contemporary Music and Technology?

We had one course called “The Business of Music” where they teach you some of the major aspects of the music profession. I remember them saying you won’t really learn it fully until you live and do it in real life.

They also focused on ear training a lot, which was great to learn and understand the theory behind the notes we sing and play!

Aside from the duet with Keith, what has been one of your favourite performances?

I just played an incredible show earlier this month in my hometown at a big theatre. I played the show with my band I’ve played with for 14 years. They’re like my family. We had a standing ovation and an encore. It was an overall amazing night. People were singing along to my lyrics. It was a pretty great feeling.

If you could co-write with any artist, who would it be?

That’s a hard question to pick just one! BUT since you said “artist” I would say Taylor Swift would be an amazing person to write with because she has never written a hit song that I don’t love!

On the same level as Taylor Swift would be Miranda Lambert – I love her songs for her real unique country lyrics and the words she comes up with, and how she puts them into sentences.

What’s the biggest difference between your first EP It Got Ugly and your newest EP Come Find Me?

I would say my songwriting has evolved. It’s just better! My melodies and lyrics are stronger. That said, there are still two songs on my “It Got Ugly” EP that I play at almost every show “Jack D” and “It Got Ugly”. Those still really fit me as an artist. My vocals have also gotten way stronger since my first EP.