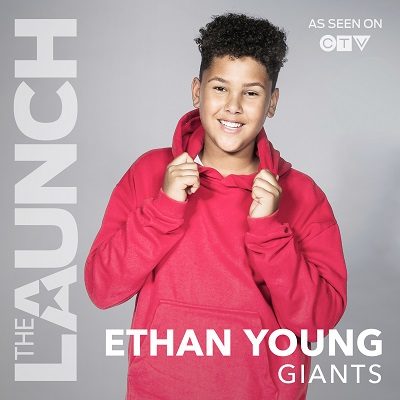 This Wednesday’s episode of CTV’s The Launch saw the youngest artist in Season One to be launched. 13 year old Ethan Young may not have age on his side, but he comes with the experience of performing live on stage with Mini Pops Kids from the age of 9. Whether it is from the past four years of hard work or just plain natural ability, this young lad is a born Pop Star and, as of the end of Wednesday’s show, his original tune “Giants” (written by Stephan Moccio and Talay Riley) is sending him well on his way. The song was released to radio and and music stream/purchase sites. It currently sits at the #8 position above Bruno Mars – Finesse (Remix) [feat. Cardi B], Bebe Rexha – Meant to Be (feat. Florida Georgia Line) and Justin Timberlake – Filthy.

Young was in the auditioning process with Elequen, Victoria Azevedo, Raymond Salgado and Grace Bakker. He sang the Andra Day song “Rise Up” with emotion and ease. It was Young and Bakker that were selected to record and perform “Giants” by this week’s mentors, Boy George (front man for the ’80 pop group Culture Club and Grammy® Award-winner), Alessia Cara (2018 Grammy® Award-winner Best New Artist and Canadian singer/songwriter), Stephan Moccio (Canadian producer extraordinaire) and Scott Borchetta (founder Big Machine Label Group). The two seemed neck and neck up to the live performance. Half way through Young’s moment on stage, he turned it up a notch and ran with it to the finish line.

About Ethan Young:
Singer-songwriter Ethan Young’s love for performance and songwriting began at a very young age. While attending Karen Kain School of the Arts, Ethan became one of the famed Mini Pop Kids, performing for sold out audiences across Ontario. He was featured on three Mini Pop Kid albums that were sold in retail stores internationally. Ethan regularly performs for charitable events including ThreeToBe, Covenant House, Children’s Wish Foundation, and Jacob’s Ladder. Currently Ethan is working on his craft live and in studio.