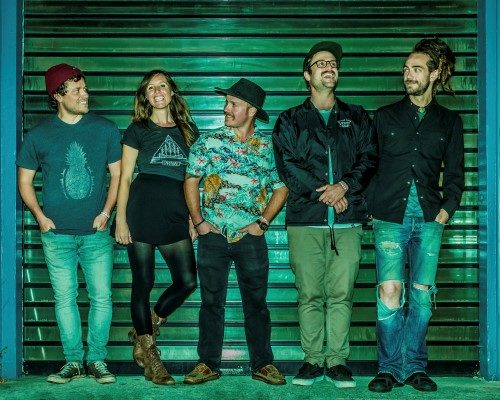 We recently spoke with Sage McBride from Fernie, BC-based five-piece band, Shred Kelly for our newest segment of Five Questions With. The band has just released a video for their single, “Don’t Ever Look Back” off of their fourth album, Archipelago which was released today via DevilDuck Records. Check it out below and while you’re at it, find out more about this talented Canadian band.

We are Shred Kelly a five-piece band from Fernie BC. We met at a local open mic night in 2009. Tim (banjo player/vocalist) was hosting the night, and the original members would all go there with different groups to perform. Tim had written a collection of songs and asked Jordan (bass) and myself (Sage) to join his original group of three. We started playing shows locally and loved playing high energy folk rock/punk/pop songs that could get an entire room moving. We immediately fell in love with the live performance aspect of music because of the way the audiences reacted. It generated such a high and we were hooked. Since then, Ty West has joined our group on guitar and we have Eddie Annett joining us for this tour on drums.

We all moved to Fernie from Ontario to ski and snowboard and fell in love with the community and the people there and never left. It’s a wonderful place to live and the community has been so supportive of our band over the past eight years.

We all have different musical influences and our writing style has changed throughout our time as a band. When we initially began, Tim had written eight songs, so we all joined and added in small parts to what was already crafted. On our second album, Tim brought some songs and I brought some songs and together as a group we arranged them together to stylistically be cohesive. On our most recent two albums every member has brought songs to the table and then we all work together to arrange them and figure out together what we all collectively like best out of the songs to choose from. For our most recent album ‘Archipelago’ we had about 20 songs written and ended up choosing 10 that we all felt really strongly about and felt worked well together with the story of the album.
A lot of our music is high energy and has a dance beat. This is definitely a reflection of our live show. We are so passionate about performing live and we feed off the energy of the crowd and that is definitely evident in the music that we write.

Live shows are our favourite. We spend a lot of time on the road, so performing live is where we feel most at home. If I were to explain our live show I would say that it is a sweaty, joyous dance party with high energy folk-infused alternative/pop/punk rock music.

At the moment, ‘Archipelago’ is my favourite. Listen to that one!