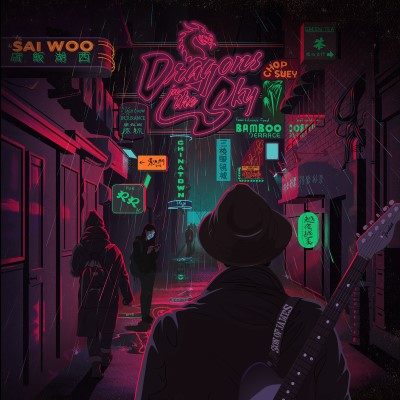 Vancouver, B.C, rock outfit Son Of James have released their second EP, Dragons In The Sky, a dynamic record that captures the essence of BC’s rich musical culture in four tracks. As a follow up to his debut EP, RUNNIN, Dragons In The Sky successfully takes the band to a new level with an exciting record that follows the story of one “hell of a day” in Chinatown.

Dragons In The Sky opens with the lush wah-effected guitar strummed in a funky rhythmic pattern underneath punchy vocals and accenting horns.  Within seconds, the title track is among the most unpredictable throwbacks to the 1970’s that I have heard in quite a while; it’s funky, groovy, and carries a sense of danger within its confident swagger.  The guitar solo under the final verse only adds a fire to the song’s intensity that is reminiscent of listening to Kiedis and Frusciante duke it out on a Chili Peppers track, circa 2007.

While “Dragons In The Sky” opens the record with a strong fusion of funk and rock, “Nightfall” balances the record out with a Latin-inspired groove along with elements from smooth jazz, including soft backing vocals, percussion, and most notably, a muted trumpet.  “Nightfall” signifies a drastic shift in tone from the album opener, and while only two songs in, Dragons In The Sky is already a highly versatile record.  The following tracks, “Chinatown” and “10 Paces” continue to push the musical envelope as the former picks up where the title track left off but ventures in a mellower direction and includes the soft counter-melody of a wind instrument.  Meanwhile, the latter seamlessly blends acoustic riffing with gritty and dark electric slide guitar- an incredible and juxtaposing choice in tone- and vocal melodies that lend themselves to BC’s Indigenous culture and population, making it the song that stands out the most and is driven by a strong sense of conviction.

Over the course of just four songs, Son Of James assert themselves as one of the most diverse and eclectic group of artists to grace the Canadian independent music scene. From the sparse use of horns to rich vocal harmonies, all of which is set over a rock steady groove and plushy guitars, this is a record that shifts – sometimes dramatically- with each song.  This makes Dragons In The Sky stand out greatly but also highlights it’s only flaw: it’s too short. Son Of James have crafted a record that is so excited, original, and thrilling that by the time it reaches its end, I am left hoping for a fifth, a sixth, and eventually a seventh song.  This stands as a testament to Dragons In The Sky; it is a must hear album from a group of musicians who you can expect to blow up in the near future.