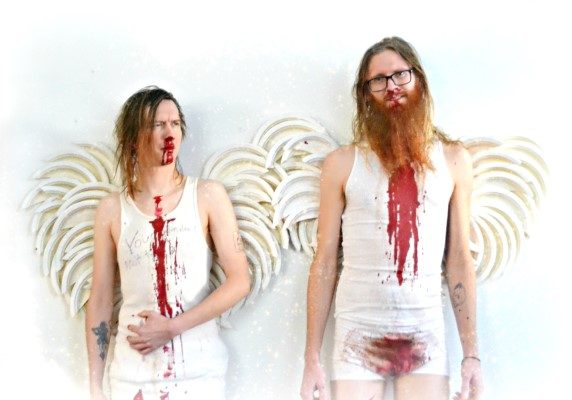 Saskatoon-based band, The Faps have teamed up with us at Canadian Beats to premiere their brand new short film entitled, “The Blair Itch Project”. The film serves as an album promo, it may not be a typical release, but that’s what makes it so fun! When we asked about the film the band commented,

“We had a couple days off to visit our best friend on Saltspring Island (BC) during our last tour. Jason just started filming weird scenes on the fly and somehow ended up with a ridiculous Blair Witch spoof.”

Check out the video below, and find out more about The Faps via our newest segment of Five Questions With.

We’re The Faps from Saskatoon. Blair plays drums and sometimes makes a mess. Skyler has a guitar that sounds like hell most of the time.

We honestly just write whatever the heck we want. There’s a natural consistency due to being a guitar & drum duo and sharing an affinity for weird and heavy music, but beyond that, we’re all over the map. You could call it “anti-rock”. We’ve also been playing and writing together for over a decade now so the process has a mind of its own at this point.

We’ve got a very special show on March 1 at Black Cat Tavern with Miesha & The Spanks (Calgary). After that, we hit the road in April to play all over Western Canada.

It’s hard to explain since we’ve never seen ourselves perform but we imagine it’s exactly like a Slipknot concert with more cross-dressing and more clowns. The Faps are the inside joke we can all get in on.

Depends what you like… most of them are quite different. First two EPs have a healthy dose of blues influence. The new album is more like a bomb went off on a pirate ship while a ballerina is screaming at you about cannibalism. Check out “Like Mike” off the HOT SLAW EP and get stoked for the title track off our upcoming full-length “Grimelda”.