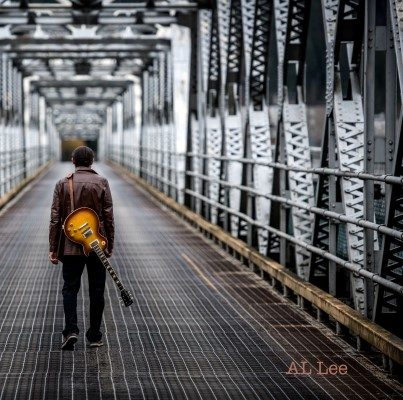 Al Lee, a singer-songwriter based out of Revelstoke, BC, has released his self-titled debut album.

According to Lee, “this album is a permutation of many genres, which is the essence of [his] style. It combines his love of clever and insightful lyricism to a foot tappin’ groove.”

To create the lyrics, Lee uses “many topics from the decisions to live a life as he sees justifiable to himself to more sensitive issues involving the society around him.”

The album begins with the sound of running water and birds chirping on a track entitled “Get Livin'”.” This is an interesting way to begin an album and it is definitely a great way to capture the attention of the audience. The lyrics send the message that we just need to live in the moment and not dwell too much on the what if’s. Overall the track had a nice feel to it, with a groove that leaves you moving along to the beat.

The tune of “Someday” seems to be inspired by the older Blues style of music. Through his song, Lee sings about his hopes and dreams and making it big in the music industry. This song is one that we can all relate to, as we all have our ‘someday’ planned out in our minds.

“Always on my Mind” is a stand out for me. The beat is at a faster pace than most of the other songs on the album. It will definitely leave you tapping your foot to the beat as you feel a  sense of urgency.

The album ends with “A Year From Today”, a more emotional song that focuses mainly on the vocals and guitar. One interesting feature of this track is the absence of drums. This aids to create the emotion as Lee sings of so many uncertainties. It seems to tell the tale of a relationship that has ended and how one may feel. He goes on to sing that maybe in a different time or different life things would have been different. It only goes to show that we never know what will happen at any point in our lives.

According to Lee, “music has always been in the shadows of other career choices but now it’s making a move to the forefront.” Following your dreams is such a brave and inspiring thing. With hard work and determination, that’s just what Lee did through working on and releasing his debut album. If you are interested in the Blues genre, then this is the album for you.