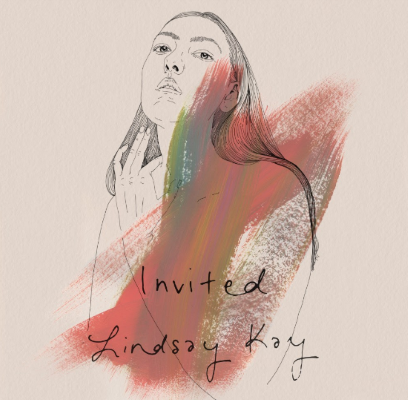 25 year old Calgary born, LA-based artist Lindsay Kay is a graduate of Berklee College of Music, where she studied Jazz Composition and Performance. Although Jazz will remain an important part of her life, she has been drawn to the folk side of things and has released the first single from her new project, For The Feminine By The Feminine. All the lyrics, production, mixing/mastering, artwork and marketing team identify as feminine and Lindsay plans to keep it that way. The single, “Invited” can be heard below, as well as a brand new Five Questions With, so take some time to find out more about Lindsay.

My name is Lindsay – I’m a 25 year old singer-songwriter from Calgary, AB, though I now reside in Los Angeles, CA. I’m a very introverted person, and I love cooking, museums, going to the cinema, the weather in LA, art in all its mediums, and spending time with the people dear to me.

My music is quiet, melancholic singer-songwriter music with a subtle jazz influence. I studied jazz extensively throughout my schooling, and although I chose not to pursue that path and instead delved back into acoustic singer-songwriter music, the jazz sound still makes its way into my music in different ways. I write on the acoustic guitar, and the guitar is the foundation for most of my songs. My music is very lyric centered – I feel the lyrics are the most important part of my songs, and I strive for “depth through simplicity,” or in other words, stating things plainly and truthfully in order achieve a depth that may be lost through over poeticizing. My upcoming album is a meditation on femininity, written and performed by women, for women, which is something I feel very passionately about.

I am not performing at the moment while I finish recording my album. I’ve never been particularly fond of musical multi-tasking… when I am in a writing headspace, I commit myself 100% to that; when I am recording, my energy is completely consumed by that; and once the album is finished, it will be performance time and I will devote myself entirely to that task. I’ve found over time that this is the best way for me to work. The album will be out at the beginning of the summer, and I anticipate beginning touring shortly after that. I am very interested in marrying visuals and music, so a future audience member can expect a visually beautiful performance, and an entirely female band playing these songs.

Feist was one of my earliest influences and one of the people who inspired me to begin songwriting at around 12 or 13 years old. Joni Mitchell and Leonard Cohen have both been massively important to me, especially from a songwriting perspective, though I suppose neither of them could be classified as “current” sadly. I’m also a big fan of Justin Nozuka, a great singer-songwriter based in Toronto, and Chad VanGaalen is wonderful.