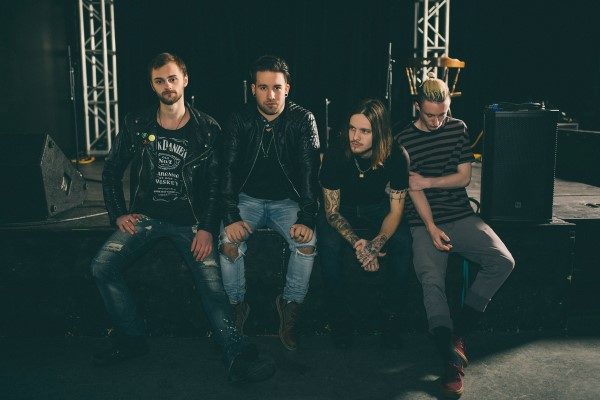 Waterloo-born rock band, Sierra Pilot have recently released their first single, “Demons Awake”, and had their debut performance at Maxwell’s Concerts & Events on February 2. The band may just be starting out, but lead singer, Taylor Leith has played with well-known artists including I Mother Earth and Adam Gontier. We had the chance to chat with Taylor through our newest segment of Five Questions With. Find out more about Sierra Pilot below.

Sierra Pilot is a new age rock band from Ontario, Canada. I’m the band’s lead vocalist, guitarist, and songwriter. We’re releasing our debut album this year–and we just released our single, Demons Awake! Our album covers a wide range of rock styles and we’re really looking forward to sharing our music this year, performing throughout Ontario.

Our music is loud and high-energy rock. We’re inspired by artists like Big Wreck, Smashing Pumpkins, Three Days Grace, and Nine Inch Nails. My songwriting has always been inspired by changes in life and how people react to those changes. Our single, Demon’s Awake is about learning to live with your own flaws, learning to be your own animal, your own breed. It’s about overcoming others’ opinion about who you are and how you live your life.

We do! Our next show is on February 2nd at Maxwell’s Concerts & Events in Waterloo, Ontario. We love what we do, and want the crowd to have as much fun as we are. Our live performances are high output and highly diverse in the rock genre. We’ve all experienced the rush that live shows give–the music is pounding in sync with your heartbeat and the performers are totally committed to delivering the best show ever. That’s our goal–to have fun with the crowd, and let them feel the stories behind our music.

Right now Demons Awake is the only song we’ve released. We chose to share this one first because it really captures the essence of the band. It gives our listeners a taste of everything we bring to the table–rock’n’roll with influences of tribal percussion, ripping guitar solos, and big vocals. This song really speaks to all sorts of people in different stages of life–we can’t wait to hear what you think!

Oh man, we love Canadian music! Our favourites include Big Wreck, Our Lady Peace, Three Days Grace, and Billy Talent. Each artist was a strong influence on our album–they’re solid songwriters and super talented musicians. What’s awesome about Canadian rock music is that each artist brings something new to the table and sets a new bar for the artists to come. Canada has produced some of the best musicians across the globe and Sierra Pilot is proud to say these artists have has an influence on our album.