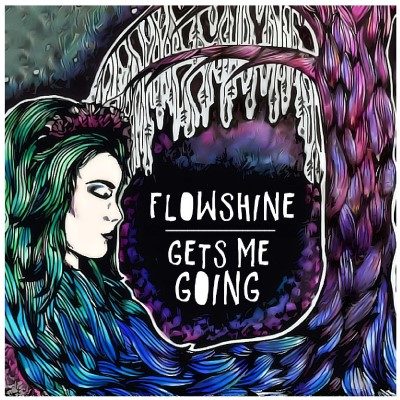 Hailing from Calgary, AB, Flowshine produce an uplifting sound that raises the spirits, and their new EP certainly lives up to its name. Gets Me Going EP gets its release this week and is a real treat!

The new 4 track EP drops February 10th and is accompanied by a tour through to the end of April (see dates below). It features last years breakthrough single ‘Blending Blue (It’s The Little Things)’ and three new tracks that illustrates the musical path these talented individuals are paving.

Canadian Beats first became aware of Flowshine on the back of the 2015 indie-pop release “You know I’m good for it” from their ‘Soak me like a wave’ EP, so we were delighted to get a sneak preview of the new sounds.

The 4-piece have been together since 2008 and features Jeremiah Erhardt (guitar, vocals) Dallen Muise (bass, vocals) Calen Blondal (percussion) and Jeff Oman (percussion).

Gets Me Going is the band’s third EP and charts their experimental and evolutionary musical journey with a more expansive sound but they remain as upbeat, catchy and downright funky as ever.

First track ‘Strange Imagination’ tricks you with its subtle upright bass intro, leading you gently into a full-on horn-heavy brass chorus train ride of a journey. It swells and sways and carries you along with its catchy latin rhythmic vibe that builds into an indie-pop crescendo. Stirring stuff. ‘Get Me Going’ slows things down ever so slightly with its funky retro beat and brass ensemble replete with haunting backing vocals. Track 3, ‘Dusty Highway’ sees the brass section taking a break, and heads into Franz Ferdinand territory awash with fuzz guitar and bittersweet vocal musings. The EP closes out with standout track and radio-friendly ‘Blending Blue (It’s The Little Things)’ and we particularly love the songs atmospheric and beautiful keyboard melody as the track draws into its final rousing chorus.

Canadian Beats had a quick word with the band prior to the release and them heading out on tour!

Can you tell us a little more about the new EP? Is this a new direction or evolution?

We tried to keep expanding our sound on the new EP. Part of that in the chord progressions and harmony arrangements, but also the instrumentation we used. Brass and percussion are more featured here than they have been previously and we’re really pleased with the results. With each of our releases we’ve really tried to grow and evolve from our previous material and keep pushing our own boundaries. I think we take some chances on Gets Me Going and I hope it will surprise listeners. EP’s are kind of a snapshot or taste test of a band and we want it to showcase our musical diversity.

What was your process when writing new material/choosing the instruments/collaborations etc?

We invited Calgary scene music veterans Mike Clark (Mike Clark Band, owner of Mikey’s Juke Joint and Mikey’s on 12th) to play saxophone; Mike Lauchlan (Penguins On Broadway, co author of A Jazz Guide To Banff… And The Universe) to perform trumpet and flugelhorn; Kate Melvina (Melvina, CKS) to play keys; as well as Madisen Muise and Ado Nkemka on vocals. We love to collaborate with other musicians and it was a very humbling and magical experience to work with so many talented people that we deeply respect. Each musician was able to add their musical signature while serving the greater good of the song. The result is a very textured and rich aural experience. All of the guests that played on this record were our first choice and we’re thrilled that everyone agreed to participate.

Who are the bands musical influences?

We listen to a lot of music. We have spent over a thousand hours together in a van so it’s not too hard to make time for it. We’re all very open with our tastes and if it’s ‘good’ we like it. We’re drawn to artists that continually challenge themselves and try to break new ground— artists with vision. Herbie Hancock, Sloan and Santana have been getting a lot of play recently in the van. To put it in boxes— instrumental jazz fusion, stoner rock, afrobeat, R&B, hardcore, pop, funk, soul etc. etc. We try to keep it fresh and learn something from everybody. Streaming services have given us more good music than we can handle and we’re trying to digest as much of it as we can.

What is your view of the Alberta music scene at the moment – What are you guys listening to?

‘Greener grass’ is a mentality that’s easy to fall into. It’s not hard to pick up on shortcomings and see other places with rose-coloured glasses. There are a lot of things we love about making music in Alberta and there are challenges. Calgary and Edmonton don’t have the hotspot reputation that Vancouver, Toronto, and Montreal do, and there’s a sort of humility we’ve found Alberta bands have because of this. There is a wealth of talent here and a lot of hardworking musicians really trying to make a go of it. A lot of people are trying to help support and foster the scene and provide opportunities. Many of our favourite bands are local and we go to shows and jams every weekend. There is a vibe of camaraderie more than one of competition.  Our favourite local acts we have a lot of love for include The Gibson Block out of Edmonton, Mammoth Grove out of Calgary, and Jordan Welbourne out of Saskatoon.

Do you prefer performing live or the time in the studio?

They are both different animals and depending on which of us you ask and on what day we might have a different answer. We love working in the studio. We feel that is where we get to be most creative and really craft something. We take longer to record a song than most bands and I think it’s because we like to experiment and take chances. We put a lot of time and energy into our recordings and we hope it shows. A big thing for us is that the songs are rewarding on repeat listens. We want to pack it with ear candy while making sure you are humming it after the first time you hear it. We pride ourselves in the energy of our live shows and that is where most people experience our music at this point. We push ourselves on stage and we always have each other’s backs. If someone’s having an off night, we try to build them up and turn it around. We have a lot of fun performing and audiences can see that.

Catch Flowshine live over the next few months and join in the fun.