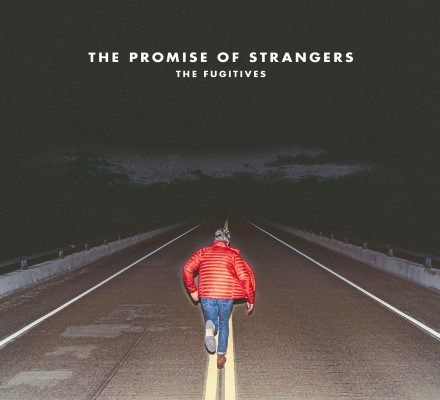 An album of dedications.

That’s what folk duo Adrian Glynn and Brendan McLeod set out to create as they worked on their latest album – The Promise of Strangers.

Better known as The Fugitives, Glynn and McLeod are often joined by violinist Carly Frey (Echo Nebraska) and banjo player Rob McLaren (Union Duke). Since 2007 The Fugitives have released four albums; with their last album, Everything Will Happen, spending ten weeks in the top ten Canadian Folk charts. This definitely sets the standards high for their most recent release.

Before even listening to the album the first thing I noticed was that each song had a short dedication written to the person the track was written for. This caught my attention and caused me to listen more to the lyrics of each song.

The first track on the album, ‘No Words’, starts with a simple, sombre melody. One of my favourite parts was towards the end, where the Awesome Strangers Gospel Choir lent their angelic voices. To me, this symbolized that even though you may feel lost when something changes, there is hope.  It was written for Leonard Cohen on the day after his passing. Apparently, Leonard Cohen is one of the few artists those in the touring van could agree on.

‘Northern Lights’ was written for the Manitoban singer-songwriter Steel Audrey who was a dear friend that The Fugitives lost in 2015.  Although the song is written for a friend they lost and they are singing of memories before saying goodbye, the tune is rather catchy. It seems to be uplifting, reminding us all that we need to remember all the fun and happy times.

‘Goodnight Everybody’ begins softly, almost giving the impression of a lullaby. According to the album dedications, this song was written while on tour in the UK. It was written for everyone who comes out to the Fugitives shows to listen, laugh, hang out, and yell at them.

I especially enjoyed ‘Come Back Down’. The Fugitives broke out their creative juices and let their talents shine through this song. It left me feeling hopeful and moving to the beats. I feel like this is the stand out for me, possibly because it seems to take a different approach than many of the other tracks.

The final track on the album is ‘Lights Out’, a song where both lyrics and melody leaving you with a feeling of despair. This song was written for Adam Capay. He was an inmate in a Thunder Bay jail who was held in solitary confinement for over four years, spending twenty-three hours a day, alone, under fluorescents lights.

Over the past ten years, The Fugitives have earned a reputation for unforgettable live shows, brimming with complex harmonies, infectious storytelling and top-notch musicianship. It is pretty impressive to see that their earlier four records have been nominated for multiple Canadian Folk Music Awards and a Western Canadian Music Award. They have spent time on the Canadian Folk charts and even earned a support slot across Western Canada with Buffy Sainte-Marie and an appearance at UK’s Glastonbury Festival.

In 2018, the band will tour across both Canada and the EU, and will venture into the United States via an official showcase at Folk Alliance International. If you have the chance to see them, this is one group you don’t want to miss.