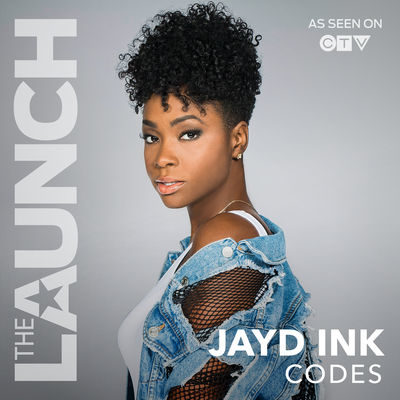 This Wednesday’s episode of CTV’s The Launch was yet another show filled with some of Canada’s best up-and-coming artists, all vying for that elusive pinacle of being chosen to launch a new original song to radio and music stream/purchase sites.

As a fan of many genres of music, it is refreshing to see the diversity of music being presented throughout this series and the strategic process the mentors undertake in chosing the artist with the best overall qualities to be selected.

Jayd Ink was the Week 5 artist chosen to launch her version of “Codes” – Production Demo Written by Meghan Kabir, Bryan Fryzel and Ferras Alqaisi. Upon adding her own spin to the single, Ink earned her own writing credit to the list as Kerr Ann Janeen Thompson. In its first day, the song hit #17 on the iTunes charts, receiving the honour of being the Highest New Entry.

Ink was up against James Marshall, Nicky MacKenzie, Noelle Maracle and Zack Lane in the audition process. She sang “Sorry” by Justin Bieber as her cover song and “Deep Under” as her original tune. Both were performed with strength and confidence. Lane was the other artist selected to record “Codes” and perform the song live.

Mentors for this episode were Julia Michaels (2018 Grammy®-nominated Best New Artist of the Year and in-demand songwriter for artists including Selena Gomez and Justin Bieber), Ian Kirkpatrick (Grammy®-nominated record producer for multi-platinum hit songs from Jason Derulo, Nick Jonas, and many more) and Scott Borchetta (founder Big Machine Label Group), who all worked with Ink and Lane to achieve the best production and performance of “Codes”.

Lane put forth a good effort, but it was this out-standing stage presence that Ink held throughout the competition that made her choice of the mentors.

About Jayd Ink:
As an independent artist, Jayd Ink has accomplished a great deal of success with her music. The Toronto born R&B singer-songwriter has been releasing music since 2013, with her background in poetry allowing her to effortlessly move through a myriad of musical genres. Jayd has been headlining shows in Toronto since the release of her first EP “Invitation Only” in 2015. What began as an attempt to get other artists interested in her songwriting has evolved to capturing listeners around the world with her unique voice. Jayd has performed in Japan alongside K.Camp, DJ Whoo Kid, and Silento, and is recognized as “Toronto Musicians to Watch in 2017” by NOW Magazine.