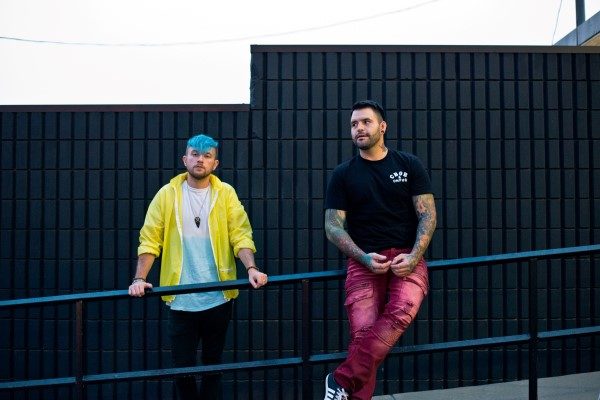 Saskatoon’s own Too Soon Monsoon took some time to chat with us for a segment of Five Questions With, and on top of that, we’re happy to be premiering their brand new video for “Faded”. When we asked them about the video, they commented,

“We filmed the video for “Faded” at PAVED Arts with Little Jack Films. Landon (Little Jack Films) did a really great job of capturing the contrast between the song’s subdued intro & outro vs the upbeat, punchy middle section. We also had some awesome Saskatoon talent join us for the video, including dancing and choreography by Jacqueline Block and Robbie Towns, as well as appearances by Julianna and Ying Tan. It was very cool to see everyone’s hard work and contributions come together to create this visual for “Faded”.”

Hey! We are Too Soon Monsoon, an alternative pop duo based out of Saskatoon, SK comprised of Greg Torwalt & Nathan Henry.  We did not know each other at all before we connected in the fall of 2016 because of a “bandmate wanted” posted online. Since that time, we have released two EPs, played two sets at Ness Creek Music Festival (including a show on the floating “Stage of Aquarius”), opened for Wide Mouth Mason, The Balconies & Mo Kenney and had our first Western Canadian tour. We have plans to play shows in both Western and Eastern Canada during 2018 and we’ll be hitting the studio again with producer Adam Grant in the spring to record our first full-length album.

With nods to influences like The White Stripes, Fleetwood Mac and Fiona Apple, our music fuses elements of rock, pop, and r&b to make a fresh sound.  As a two-piece, one challenge we face while writing is to make sure that the songs will sound big enough for a live setting. Using just our two instruments (keyboard and drums), we focus on dynamics to ensure that the music has subtle changes throughout the course of the song in order to catch the listeners’ ear and keep them listening. Lyrically, our writing style is quite reflective – some songs are written as a self-reflection whereas others are created while reflecting on our environment and the situations we find or have found ourselves in. While it can be scary to write personal lyrics, we hope our listeners can connect and relate to the messages we are sharing.

We will be playing two shows in Saskatoon during February. February 10th at Amigos Cantina with ROMES and NIght Switch and February 16 at Vangelis Tavern with Bears in Hazenmore and Taylor Jade. We’ll be taking a bit of a time to record our full-length album after these shows and then we’ll hit the road again starting in late April.

If you’ve yet to see us live, you can expect a high energy performance from the two of us! When we tell people that we are a keyboard and drum duo, a common reaction is that the music will be soft, chill… but we love to get a crowd moving with us and feeding off of their energy. Greg doesn’t stay behind the keyboard during the whole set either – the band has started to write and perform songs that find Greg moving around the stage and engaging with the audience.

Hopefully, you listen to & watch the video for “Faded” since it just came out today, but if you don’t feel like pressing play on that, you should check out “Contagious” –  the closing track from our most recent EP, Side Effects. This song speaks about the “contagious” feeling that one can experience when they are struggling with their mental health and know that they want and need to talk to others, but instead keep things to themselves because of the fear of bringing other people down. We’re really proud of this song, we think it shows off our strengths as a band and it includes one of our favourite parts to play live – listen for the breakdown around 2:30!

The Broken Social Scene family have always been favourites of the band (Feist, Metric, Stars), but there is something very special and striking about Emily Haines’ Choir of the Mind album – Greg has been playing this record on repeat since it was released back in the fall. Other favourites include Arcade Fire, The Arkells, Alexisonfire, Death from Above 1979, Philosopher Kings, and Cancer Bats. There has also been a lot of great Saskatchewan music released in the past year from some cool acts like Etienne Fletcher, Ellen Froese, One Bad Son, The Pistolwhips and The Garrys.