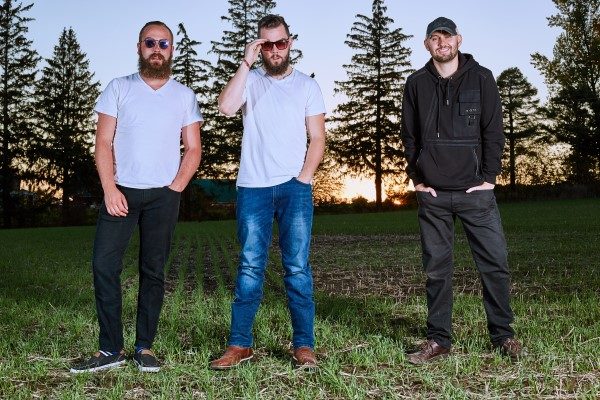 Barrie, ON-based alternative rock band, Cousin Jack has just released a music video for their single, “Drive Me”. You can see the video below, as well as our newest segment of Five Questions With. It’s the perfect time for you to find out more about this up and coming Canadian rock band.

Together, the band has brought together a varied spectrum of music that we enjoy, ranging from rock to rap, to folk, to psychedelic. As individuals, we definitely have differing tastes that make up the sounds that we bring to the table for writing purposes. Generally, how a piece is written, one guy will bring an idea into light, with a specific taste that typically creates the overall effect of the song. Taste like in personality you know. Lyrics are usually attached already. On a collaborative note, once a rough overview of the idea is in the picture, the boys shoot out different licks, beats, and grooves to the tune that emits the hopeful everlasting effect that the song intends to generate. It could be moody, uplifting, jumpy, something that seeks that specific emotion. Overall, writing is like an egg that hatches into a small, exciting thing that people eventually want to taste.

Do you have any upcoming shows? For someone who hasn’t seen you play how would you explain your live performance?

Yes, we’ve got shows coming up soon. Our next show will be at Lees Palace on March 1st. We’ve also got a show on March 9th at our hometown headquarters, the Foxx Lounge in Barrie with the Thrifty Kids and Chladny. The lead guitarist, Dylan Frankland, from Thrifty Kids actually recorded our first three recorded songs, which includes our latest single, “Drive Me.” Back on track, we’ve got a couple of surprise shows in and around Toronto late February. Also, we’re playing at the Sawdust City Brewery in Gravenhurst for St. Patty’s day Mar 17th! Coming into one of our shows, you’ll experience a high-intensity performance with loud instruments, engaging antics, and colourful vibes. When we play, we leave it all on the stage. After our shows, people should feel free to approach us. We live for the pre and post-show interactions and tend not to shy away from after party invites.

If you were asked to suggest one song for people to hear, which one would it be?

We’d love everyone to experience all of our songs, but “Drive Me,” seems to be the direction that we’re aiming for. “Drive Me,” encompasses our overall writing style and it has a relatable theme to all of our lives. Luke met this girl, things were good, then got bad, then were good again. That kind of push and pull scenario. He then decided to express the understanding that as we fish, we want that initial overwhelming feeling of bliss and excitement; every bite is a reincarnated euphoria. That’s what makes fishing so fun, but be careful though because as you taste, you may get hooked, losing your sensibility and true self.

Canadian Beats is all about Canadian music, so who are your current favourite Canadian Bands/artist?

This one’s a tough one because there are so many artists that we idol. We would say though that the late Gord Downie and the Tragically Hip has had a huge influence in our music and lives. We also like Our Lady Peace. People say we’re pretty similar in sound with these guys, and we love their music.