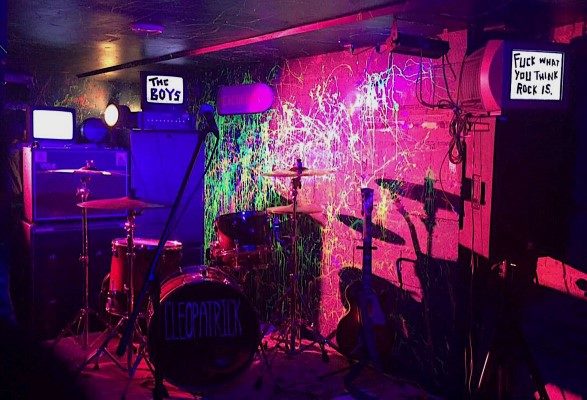 Who: cleopatrick
When: February 3, 2018
Where: The Peacok, Toronto, ON

The essence of cleopatrick was brought to life at Saturday night’s single release party at The Peacok. The invite-only event was filled with brilliance – unlike anything ever experienced before, cleopatrick transformed the underground Toronto bar into a glow-in-the-dark haven… redefining rock’n’roll, and all that goes along with it.

The night kicked off with the premiere of their newly released single “Bernard Trigger” – a powerhouse of a tune, which completely complimenting the talents of the Cobourg duo. The combination of the haunting vocals, and an unfledged coolness brought cleopatrick fans everything they can expect from the rock duo. The effortlessness of it all had everyone in awe – such raw talent present by such humble musicians.

The atmosphere of The Peacok was overwhelming. The admiration and love reciprocated by everybody in attendance was incredible. cleopatrick have not only given fans undeniably stellar tunes but have given them a family. As they rocked the night away, playing more originals, like “hometown” and “Belly Button Blues”, there was such a grand sense of community and passion. The night perfectly represented everything “cleo” – from the tunes to the atmosphere, The Boys™ certainly know how to put on a performance. Saturday was a dream come true for cleopatrick super fans.

Be sure to checkout their new single “Bernard Trigger” here.

itsakaitbigworld.weebly.com
Related ItemsBelly Button BluesBernard TriggercleopatrickCoburg ONHometownontarioOntario Musicthe boysThe PeacokToronto ON
← Previous Story IN PHOTOS – Amanda Rheaume in Mississauga, ON
Next Story → Cody Coyote continues his journey in 2018 with a stop at the National Arts Centre