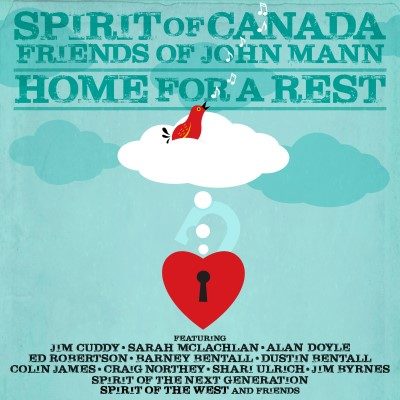 John Mann is one of Canada’s most well-known artists, earning his place on stage and screen. For more than 25 years Mann has fronted the beloved band, Spirit of the West. Despite major career success, Mann has had his share of health troubles and scares including battles with cancer from 2009 to 2011. Most recently Mann has started a struggle with the diagnosis of early-onset Alzheimer’s.

To show love and support, both spiritually and financially many of Canada’s brightest stars have rallied together in support of Mann. What started out as a benefit concert on November 19, 2017, at the legendary Commodore Ballroom has now turned into the release of the song of the night; a cover of Spirit of the West’s song, “Home for a Rest.”

Performing and recording “Home for a Rest” as part of a benefit in Mann’s honour at the Commodore Ballroom in November 2017, has resulted in a video and single which now sit at the helm of a GoFundMe campaign. The campaign has been organized to assist Mann in his extensive care for the devastating degenerative disease. 100% of the proceeds from the sales and streaming of the new release will go to the John Mann Trust Fund.

With less than a thousand dollars away from its current goal; the recording of “Home For A Rest” and collaboration from fellow Canadian artists is a true testament to the love and support that we as Canadians offer when those are in need. Each artist shines brightly on the track as their performance was fueled by passion and hope. You can check out the campaign, and make a donation to support Mann on GoFundMe. To check out the star-studded video posted by Alan Doyle, you can check it out right here. The video includes footage from the November 2017 performance and the recording of the track.

“Home For A Rest” can be purchased for download on iTunes, Labelstore, and GooglePlay.