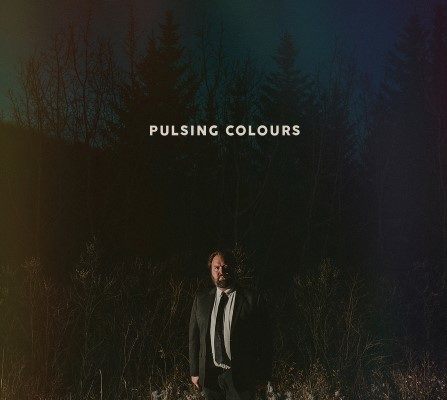 Regina, SK based singer-songwriter, Ryan Hicks is set to release his 2nd full-length album, Pulsing Colours on February 9, 2018, but Canadian Beats readers are getting an exclusive first listen to the album, and we know you won’t be disappointed. When asked about the album, Ryan commented,

“This album came to me with just as strong visuals and moods as it did melodies and lyrics. I was really inspired by David Lynch’s work, specifically Twin Peaks, and wanted to channel some of that world’s wonder, mysticism, humour, darkness and craziness. When I wrote the song, I imagined the song being sung from the perspective of a moon far away from other planets. Cold, silent, still and alone. This is a metaphor for how some people live their lives. It might not sound like it, but really it is a love song about someone coming into your life and making sense of all things. While you might not have all of the answers, you find the world is good and right when you are with them. This goes beyond romantic love, as there are people in my life who I feel bring clarity to the world when I am with them.”

Take a listen to the album below, and find out more about Ryan Hicks in our newest segment of Five Questions With.

I’m Ryan Hicks. Singer/songwriter/musician/producer from Regina, SK. I released my debut album, Prairie Ocean, in 2014 and I am about to release my new album, Pulsing Colours, on February 9th.

I make cinematic alt-pop music. Imagine if Brian Wilson, Paul McCartney, The Fleet Foxes and Arcade Fire got together to do a soundtrack to a David Lynch movie then you will have an idea of what my music sounds like. My writing is inspired by heartfelt lyrics to memorable melodies, harmonies and arrangements. Some advice I received a few years back is that all of your songs should pass the campfire test. In other words, does the song sound good with just an acoustic guitar and voice?  Better yet, just the voice? I love production and arrangements, but I work hard to write music that is well-crafted in its lyrics and melodies.

Yes. The official album release is February 9th at The Exchange in Regina. And on February 10th, I’ll be playing in the afternoon in Calgary at the Cornerstone and the evening in Canmore at Good Earth. February 22 in Winnipeg at The Purple Room and April 8th in Calgary at Ironwood.

I am currently setting up more shows, hopefully across Canada. I’m working on getting out to more fans by playing shows across the country in 2018.

My live show is sometimes with a full band and sometimes solo, with me playing guitar/keys and singing. For the album release show on February 9th I have a killer live band. They sound great and are making the songs from “Pulsing Colours” come to life! Often, I perform solo and I love these opportunities to play in intimate environments. My music has a message and often there are stories behind the songs. In these solo shows, I get to establish a relationship with my audience with a great deal of interaction. Hearing one person singing and playing guitar all night has the danger of sounding all the same, so I work hard to create many different textures with my songs, guitar and voice.

I would say, “Pulsing Colours” from the new album. I really feel like I found my voice as a songwriter and artist on this record. That song has many different moods and textures with a catchy chorus that pays off. A signature sound of mine is atmospheric textures and harmonies and this song certainly has its share of those.

As far as heavyweights, I would have to go with artists like Ron Sexsmith and Neil Young. As for current bands, many of my favourites are Saskatchewan artists including  Eekwol, The Dead South, Megan Nash, Rah Rah and Andy Shauf. I LOVE Andy’s last record, The Party and my album was recorded at the same studio, Studio One in Regina. Other notables I love include Metric, Yukon Blonde and Terra Lightfoot. I really feel these bands are making some of the best music in the world and I am anxious to hear what they will be releasing next, as I am a real fan of their work.