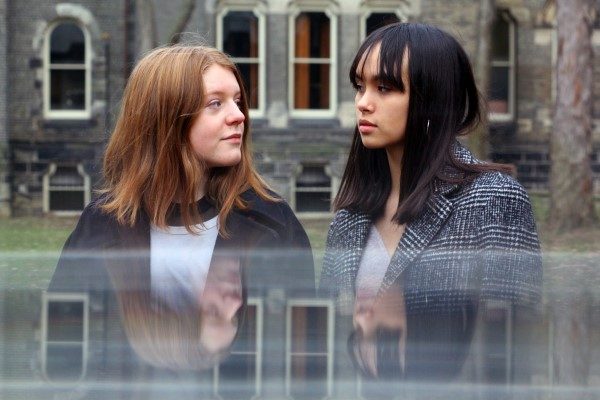 Moscow Apartment is made up of multi-instrumentalists and vocalists, Brighid Fry and Pascale Padilla. The duo has been chosen as Young Performers of the Year at the 2017 Canadian Folk Music Awards and Best Young Songwriters at the 2017 Toronto Independent Music Awards, so that in itself should pique your interest enough to check them out, but we thought we’d help you learn more about this talented duo in our newest segment of Five Questions With.

While you’re at it, take a few moments and check out the video for their newest single, “Annie” below.

Yeah. We are Moscow Apartment. We are a duo comprising of Brighid Fry & Pascale Padilla. We formed a year ago but started singing together as part of the Viva Youth Singers when we were 5. We are both 15 years old. We sometimes play with a backing band made up of Doc Beck-Levine and Melissa Paiju. We live in the west end of Toronto, go to an arts high school and love writing and performing music.

Our music started off as a lot more folky but it has been increasingly moving into a more indie rock style. Our writing style is really organic. We hang out as friends and goof around more than we should and then carve out our writing time. Sometimes one of us will approach the other with some ideas but the approach is very collaborative.

We write a lot about issues that face us as teenagers and also do a lot of story songs where we essentially make up drama about some fictional characters and then write about it.

We just played at The Horseshoe Tavern which was amazing and our next shows are at Winterfolk in Toronto on February 18th and as part of Violet Fest on February 17th. We are also performing at The Dakota Tavern on February 23rd. It is an early all-ages show which we are excited about. We are flying to Halifax in March after a show in Guelph on March 9th. Playing in Halifax on the 13th, Montreal on March 16th and at The Black Sheep Inn in Wakefield Quebec on March 18th! Whew

“Annie” was our first single and we have a really amazing video shot and directed by Tim O Reilly. It has an important message about pushing back against unrealistic beauty expectations and the idea of trying to make our bodies “perfect” according to some kind of externalized pressure.

So hard! There are very many amazing Canadian musicians. Off the top of our heads, The Good Lovelies, The Weather Station, Feist, The Lifers, Missy Bauman, Ahi, Stars, Broken Social Scene, Charlotte Day Wilson, Samantha Martin & Delta Sugar as well as Metric.