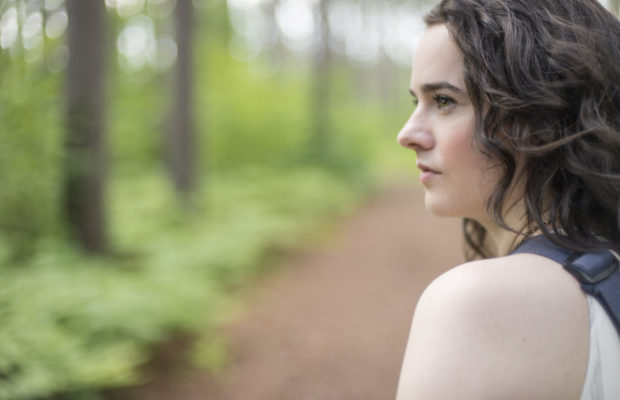 Rose-Erin Stokes is a folk singer-songwriter from northern Ontario. Her album Wherever I Go was released on January 26, and Rose-Erin is now on a month-long tour across Ontario. Canadian Beats got the chance to ask her some questions about her songwriting and her new music.

Congratulations on receiving the 2017 Northern Ontario Music and Film Award for Best Songwriter along with your group Hidden Roots Collective! What’s your songwriting process like? Do you start with the lyrics or the music?

Thank you! With writing I think it depends where I am…sometimes lyrics will come into my head when I’m walking or going about my day, other times it’s more intentional where I’ll sit down and play around. Usually, the melody comes first with some loosely formed lyrics. Other times I just get lucky and get hit with a wave/ strong impulse to sit down and write and a song comes out in one sitting. I try to stay emotionally open for songs to come but definitely have phases throughout the year when I’m writing a ton and some when I when I’m not writing much at all.

What is your favourite lyric from a song you’ve written?

The lyric: ‘Wherever I go, there I’ll be’ from my song ‘Wanderer’. For me, it’s about self-acceptance and being okay with where you’re at.

The cover of your upcoming album “Wherever I Go” is gorgeous. What made you pick that image?

It’s kind of a funny coincidence how that photo came to be. I was on my first solo tour travelling by train and bicycle. Long story short a lot of things went wrong and my phone got water damage day one of cycling. So I bought a disposable camera because I still wanted to have a record of the trip. When I got home and developed the photos each photo had half of one photo and half of the other and had some weird discolouration. It seemed like a fitting image to go with the title of the album Wherever I Go, so I decided to use it!

What venue are you most looking forward to playing on your upcoming tour?

I’m especially looking forward to playing at the Old Church Theatre in Trenton cause it seems like a lovely space. I’m also pretty excited for our Toronto show at the Burdock and our Ottawa show at LIVE on Elgin.

Who are some of your favourite Canadian musicians?

What advice would you give to a new musician?

I think the main thing is to trust that if you’re producing art that you believe needs to be heard to run with and to not let your fear of failure get in the way. I feel like a big part of being a young artist for me anyway has been getting past my own self-doubt. I would also say it’s important to find a way to manage all of the other business aspects of music that works for you and realizing that there’s no one way to go about doing things…That being said, I feel like I’m still figuring things out.

If you could co-write with any artist, who would it be?

I would love to collaborate with Donovan Woods. His songs are so catchy and subtly produced but they just reach you right away. Also, he seems to be constantly writing and pumping out new material which is cool to see. I think his secret power with his writing is his simplicity.

At the end of your music video for “Not Alone”, you pour water out of your guitar. Whose idea was that and what is it meant to symbolize?

That was my first music video shot in 2015 as a part of a collaborative music and film workshop at the Northern Ontario Music and Film Awards. The idea came from emerging director Alek Belanger. I think the idea of having the guitar floating down the river was sort of to create tension, symbolize something that is out of reach, which I end up acquiring by the end of the video. Dumping the water out of the guitar was just a way to wrap up that story with a sort of comical moment.

What can fans expect at a live show?

Songs that may tug at your heartstrings, a mellow escape from your busy life and some sub-par but endearing jokes.