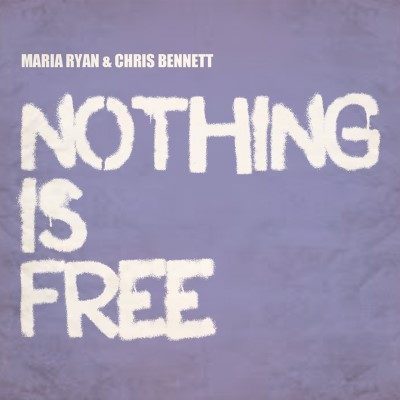 Following the release of their 2015 self-titled debut, Maria Ryan & Chris Bennett have returned with their sophomore record, Nothing Is Free. The Toronto based band- led by Ryan on vocals and guitar and Bennett on guitar, and backed by drummer Dave Mitchell and bassist Jeff Dunk- successfully return rock to its roots over the ten tracks of their second outing as a band.

Opening with a crunchy rocker reminiscent of the harder hitting material from the late Tom Petty, “Nothing Is Free” sets a brash tone for the album with its bouncing roots rock and folk-inspired narrative set over fuzzy guitars and punchy vocals. While the title track pulls no punches, much of Nothing Is Free takes a mellower direction that bridges a classic rock tone with the singer-songwriter style.  Songs like “Waltz For Alisa” and “How Do We Do This Now” feel modern through their connection to the very popular singer-songwriter genre, but the inclusion of a full band and other rock elements brings a new side to the style that is often forgone for solo acoustic guitars and vocals.  This sets Maria Ryan & Chris Bennett drastically apart from their peers.

Maria Ryan & Chris Bennett shine brightest when performing songs similar in tone to “Nothing Is Free”.  While few and far in between, songs like “Walk” and “That Would Be A Crime” captures an intensity and a sense of fiery passion that makes for an entertaining listening experience. These songs are fueled by a subtle hint of the blues and 70’s rock while still feeling fresh and unique amongst today’s musical climate.

Through combining such a drastically different collection of songs, Maria Ryan & Chris Bennett have created a successful sophomoric release that challenges modern soft rock and the singer-songwriter style by cranking their amps up and calling in a full band.  The result is an exciting album that spotlights excellent songwriting with the performance force of a tight band. Nothing Is Free stands as a strong return for the Toronto based group and will leave fans excited for what is to come.