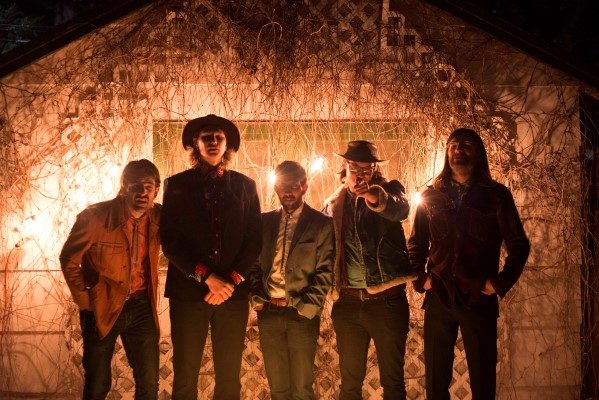 Edmonton based alt-country band, The Denim Daddies have released their debut single, “Road Runner”, and we are happy to be able to premiere this release. The single was written at the Alberta Music songwriting camp last summer with the talented Mariel Buckley and two members of North of Here, Luke Jansen and Ian St Arnaud. The band has dedicated the single to the memory of Luke Jansen.

The Denim Daddies will be playing a single release show at The Aviary in Edmonton on February 3, so if you’re in the area stop by and check it out. They will be joined by local talent, Jordan Norman & The Wisdom Teeth, who will be releasing an album the same evening. Click HERE for more information.

Now, take a moment to check out the new single, and our newest segment of Five Questions With below!

The Denim Daddies are a spit in the face to today’s modern ‘country’ music that is heard on most radio stations. The Denim Daddies are a shot of the ol’ outlaws attitude mixed with the modernism of alt-country and a splash of the classic Nashville sound, all glassed in the high-powered sound of a dynamic live band. We are influenced by the classic country sounds of The Flying Burrito Brothers, Willie Nelson, & John Prine, as well as modern revivalists Sturgill Simpson, Jason Isbell, & Corb Lund.

Our typically writing style begins with Rick Visser or I coming up with the bare bones of the song, usually just chords and lyrics. Then the two of us will get together and flush out more ideas for the song; form, melody, riffs, lyrical changes, etc. Once we have a good basis for the song, we’ll bring it to the rest of the band to share their ideas and add their colours. After spending some time producing and rehearsing the tune, we’ll play it live to see how it impacts an audience and figure out if there are any changes to be made. Of course, once you hit the studio that can all go out the window haha.

We are our having single release show on Feb 3 @ The Aviary, Edmonton with Jordan Norman & The Wisdom Teeth. (Who are doing an album release that night.) We are also playing with Shred Kelly on Feb 15 @ The Starlite Room, Edmonton.

The Denim Daddies are an extremely energetic and engaging live band. We play catchy, creative songs with intense & intricate parts on top of lush harmonies that give way to rippin’ solo sections. Dancin’, singin’, hootin’, and hollerin’ are always to be expected!

“Road Runner” because it will be the only song you can hear from us haha. (At least for a little bit.) “Road Runner” was co-written with Mariel Buckley and Luke Jansen & Ian St Arnaud of North Of Here at an Alberta Music songwriting camp in between shotgunnin’ beers and jumping in the pool. But to find your favourite you have to come see us play live.

We are a bit biased to Edmonton artists because we are all friends and have such a tight community. Altameda, Tropic Harbour, Lucette, VISSIA, Jesse & The Dandelions, Bad Buddy, The Velveteins, Scenic Route To Alaska; the list could go on forever! Also, definitely Mariel Buckley, she’s got a banger of an album coming out right away here. And can’t forget the enigmatic Daniel Romano.