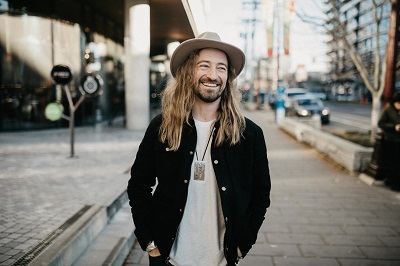 B.C. based singer-songwriter and guitarist, Jesse Roper releases his new album Access to Infinity on February 2, 2018 via Blue Heron Music. With a sound rooted in rock and roll with a hint of blues and soul, the new album showcases Roper’s unique style. His guitar playing stands up with the best of the best and needs to be heard.

Produced by Ian Davenport (July Talk, Band Of Skulls, Supergrass) at Vancouver’s Warehouse Studio, Access To Infinity’s 11 songs encompass the raw riffing on which Roper has built his reputation, combined with a modern take on the psychedelic explorations of Jimi Hendrix and Pink Floyd. As demonstrated by the primal first single and video, “Cherry,” Roper is ready to take on the world without allowing anything to stand in his way.

Access To Infinity follows Roper’s celebrated 2015 album Red Bird, which captured a lot of the fire of his dynamic live show. Roper has shared stages with the likes of soul icon Booker T. Jones, blues belter Beth Hart, and Canada’s own blues institution Colin James. He’s had headlining appearances at Rifflandia and Rock the Shores, and talked-about appearances at the Burnaby Blues and Roots Festival and BreakOut West, among others. Roper will be on the road supporting Canadian rockers Big Wreck on their In Loving Memory Of Tour for 18 North American dates, but not before his must-see CD Release Show on February 2nd, at The Waverley Hotel in Cumberland, BC. All tour dates can be found here.

Be sure to check out Gerrod Harris‘ Album Review for Access to Infinity here.