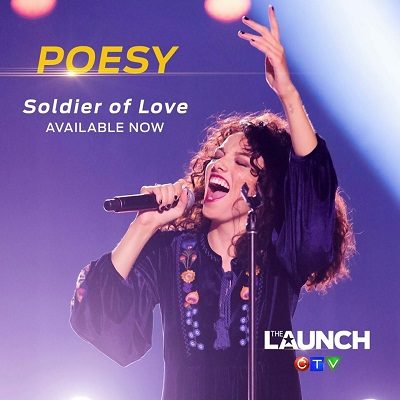 Following Wednesday night’s episode of CTV’s The Launch, London, Ontario’s POESY, was chosen to record the new original single “Soldier of Love” (written by Stephan Moccio and Lindy Robbins). The series’ fourth single was released to radio stations across the country immediately following the night’s broadcast, and is also available for purchase and streaming everywhere, including iHeartRadio, Apple Music, iTunes, Spotify, and Google Play.

This week’s episode saw five new artists vying to be the next to launch. POESY was up against Jaryd Stanley, Sariyah Hines, Faiza and Ezra Jordan. Jordan gave a powerful vocal performance that made the mentors –Fergie (Grammy® Award-winning, multi-platinum solo artist and recording star), Canada’s own Stephan Moccio (Producer/Composer – Miley Cyrus, The Weeknd, Celine Dion) and record mogul, Scott Borchetta – take notice. He and POESY were the two selected to record “Soldier of Love” and perform the song to a live audience. This was one of the toughest choices yet! However, POESY, with her soaring, powerful vocals and haunting tones made her the clear winner.

It is thrilling to see yet another #1 hit on the iTunes (All-Genres). Congratulations POESY and The Launch!

About POESY:
After writing her first song at age 9, POESY is now fully immersed in the alternative indie world of music. Her name is derived from an archaic word for poetry, and is a callback to her time as an English and Creative Writing major at Western University. POESY finds inspiration in literature, 1970s rock, thrift stores, and bus rides, to create the narratives present in her songwriting. POESY’s infatuation with all types of art is behind the short story she wrote to accompany each track on her debut EP, “The Spotless Mind”. Her influences include Freddie Mercury, Katy Perry, Florence Welch, Kurt Cobain, and Stevie Nicks.

Reinventing the music television series genre, The Launch debuts a new and unique format, documenting an authentic, behind-the-scenes look at what it takes to break a new artist and bring a song to life.