By Jordyn Armstrong on February 1, 2018@jordynhannah95 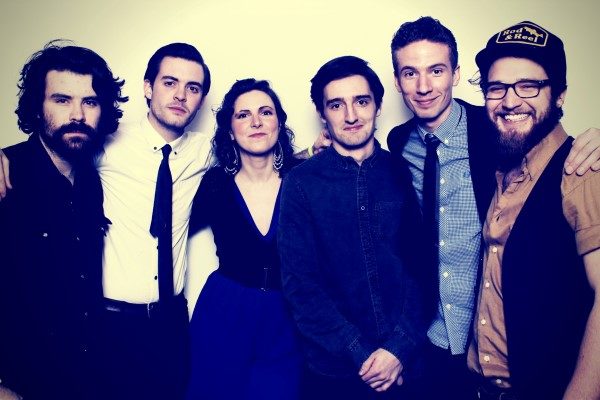 Major Love is the moniker of songwriter/musician Colleen Brown – and a new album featuring members of Scenic Route To Alaska, Jesse and the Dandelions, Elijah Abrams (Oh Susanna) & Aaron Goldstein (Daniel Romano). From Edmonton, AB by way of Kingston, ON, they make soulful pop-rock music for their hoser friends.

Major Love has just released their first single Tear It Down and they are going on a small tour around Alberta to build momentum for the album release, August 17, 2018.

To find out more about this compilation, the album and the tour, check out our interview!

Can you tell the readers how this mix of bands and artists came to be?

Colleen and the Scenic Route dudes met when they were both touring around England a few years ago. Kinda funny because they’ve all shared Edmonton as home base for either their entire lives (in case of Murray, Shea and Trev) or the most recent decade and a bit for Colleen. Colleen and I (Eli) met when she was sitting in with Oh Susanna (whom I play with fairly regularly) about 3 years ago. Right around that time, Colleen and the other guys were starting to record the bed tracks for the album. A little after that, CB and I started dating, and playing music together, and then I was in the band and became best buds with the rest of the guys and that’s how it all came to be!

Is it hard to make an album when the members span across provinces?

It definitely has its challenges. The album went through quite a few different ‘phases’ of production, with Jesse Northey at the helm to start the bed tracking in Edmonton. From there, they met Aaron Goldstein at the inaugural Bear Creek Folk Festival and he did some picking, poking and prodding, some arrangement additions and changes, some more guitars, trumpet, and a few different colours etc.

Is there an official release date for the album, Major Love?

We’re working with Latent Recordings to get the full album released by August 17, 2018! Be on the lookout for a 4 song EP coming out sometime in March.

Is Major Love the only album you plan to do with each other or will this be an ongoing thing?

Of course we would love to keep the band the way it is with the amazing group of people that are in it now. But, it’s hard to say if the Everyone will have time for it. Scenic Route to Alaska are really killing it right now. And they’re gonna want to keep doing that for sure. WE WILL SEE.

Colleen: I had written a bunch of songs over the previous year, and in touring in Germany and the UK, and I had a bunch of songs that didn’t seem to fit in my solo catalogue. So I had them mostly written – form, lyrics, melody. All that good stuff pretty well together. I played a bunch of them for the guys, just planning to record one or two songs with them – but it went so well that 2 songs became 10, and everything grew from there! Everyone added what they could to help support the songs, and make them fun to play, and hopefully fun for enough people to listen to.

Can you tell us about some of the songs on the album?

Colleen: Well, one of my favourites, Motherland was written on my first day of that trip, my first time ever overseas, and alone at a hostel in Linz, Austria. I was homesick and felt out of my depth. It’s basically a love letter to the province of Alberta a la ‘Edelweiss’, or that’s what I was hoping to write… then there’s Tear It Down, which is the first single from the album. It was written a little bit earlier than the others. There had been an explosion (a murder/suicide) in the seniors residence across from my apartment. Every day for years I would look out my kitchen window at the burnt out building. It was this really dark, daily reminder of death. Then one day they started tearing up the building, gutting it, and clearing things out, and over time they completely renovated it, and started renting it out again. It was a really interesting process to watch, especially as a self-employed artist, watching other people do their job, day in and day out, removing the remnants of someone’s psychotic breakdown. There was a lot to contemplate in that, death/rebirth.

The next single, So Good, was written within a couple of minutes, in a shower stall in a London UK hostel. Willesden Green. I had gone for a run and laid down on the grass in a nice park and I guess I shook off some of my same-old-doldrums. Travel is great for opening your eyes to what you have and where you’re at (which of course is constantly changing.) I guess it’s about being present in your life. In that way, it’s sort of funny, since I interrupted my shower to write about it.

Do you think the album shows a little bit of everyone? Is there one artist/band that stands out?

Well, the songs are mine, but I really feel like each musician added so much. That’s why it couldn’t be a Colleen Brown album, it was just too different. It felt like alchemy, all these separate elements coming together to make a totally new thing.

The tour dates featuring Colleen Brown and Scenic Route to Alaska are only in Alberta; are there plans in the works to reach more of the country?

Eli: Again, we’d love to play these songs everywhere all together, but, we gotta see how everything shakes down. These songs will be performed with some version of the band (certainly including Colleen and myself) very widely!

We’re hoping 2018 sees lots of growth for the band. We want to play, festivals, theatres, clubs, and we are lining up a bunch more shows like that. Canada has a bunch of awesome stages, however, we’d really like to spend some time playing in Europe. Music is great for a lot of reasons, one of my favourites is how it’s a conduit for us to see so many wonderful new places.

Be good to each other!