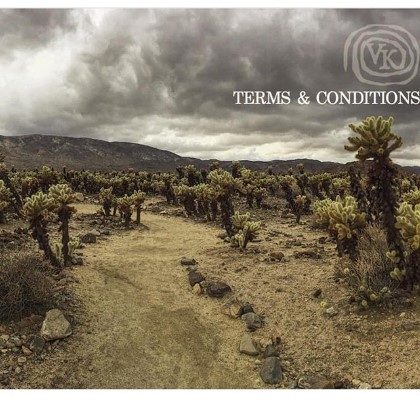 VK is a duo comprised of Steve & Marni Van Kessel, which makes up the VK in their name. Hailing from Orillia, Ontario, the duo has one of the most unique sounds I’ve heard in a long time. They released their latest full-length album “Terms & Conditions” in November of last year.

As soon as the first song “What Makes Sense” started, Steve’s unique voice instantly had me hooked. I turned it on and as soon as he sang, I noticed that it sounded so much like mainstream country, with a hint of Elvis thrown in. The music can be explained as easy listening, with each song telling it’s own story and creating something new for the listener.

This release is one of those “sit back & relax” albums. The amazing vocals from Steve and the music from both Steve & Marni are one of the purest mixes of music I’ve heard in a long time.

“Edge of the World” was an instant favourite. Steve’s lead vocals and Marni’s backing vocals mixed with the beautiful music make it stand out. Followed by “Take The Chance”, which has a darker tone but with a positive message.

I can tell you this is an album unlike what youv’e heard before. The true, unhindered talent from both musicians was a most welcomed surprise, and I will certainly be adding it to my collection.