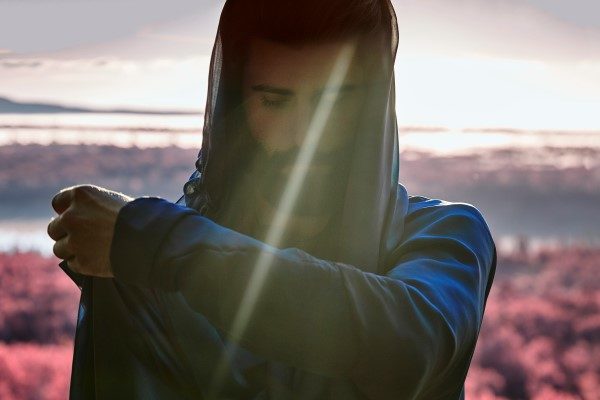 Toronto-based Kayobe recently released a video for “Sun Don’t Shine”, as well as a brand new release entitled Hidden EP. Now, it’s time to find out more about this up and coming Canadian artist in our segment of Five Questions With.

I’m Kevin O’Brien; producer/ singer/ composer/musician, born & raised in Calgary, then moved to Toronto and currently checking out the scene in London UK for a little bit.

Well, my aim is to fuse the electronic/instrumental production I’ve been doing over the last few years, with the musical jamming of being in a band and writing songs. I played drums, guitar and sang growing up. To write, typically I’ll start with my keys & synths and mess around for a while until something like a melody or a sound grabs me, then build that into a track with the percussion etc. Experimentation is a big part of my style, and I often call the studio ‘the lab’. From there it either goes on to become an instrumental or a song that either I will write on, or collaborate with a featured vocalist.

Some shows coming up in Toronto and London! Stay tuned for exact dates. I’m very excited to play live with this new project. Basically, it’s a hybrid between a live show and a DJ set. So it’s just me as a solo show, an experience, a journey, with custom LED lights and a live show vibes that also turns up with beats and live loops. It’s gonna be a lot of fun.

This is a tough one for me as I’m trying to express a sound that’s cohesive, yet also able to venture through multiple genres. So there are different songs for many different reasons/ days/vibes. If you want to dance, it’s ‘Whiteout’, if you want vibes it’s ‘Sun Don’t Shine’, feeling blue it’s “Let Go”, summer space vibes is “Steppin” and if you want to meditate it’s “Monks Of Trinity // Saturn” haha so as you can see there’s a spectrum that’s hard to express with just one song. Basically, I’m saying you have to just listen to the whole EP.