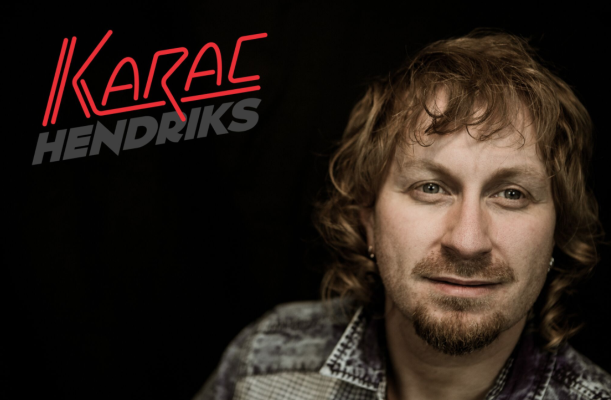 We recently had a chat with ACMA nominee, Karac Hendriks. Karac has just released his latest single, “The Road Is Mine” which is off of his upcoming sophomore album of the same name, due out on March 2, 2018. Find out more about Karac in our newest segment of Five Questions With below.

I’d love to!  (Full disclosure: I am a frequent visitor to Canadian Beats, so this is a bit surreal.)  My name is Karac Hendriks.  Karac is pronounced “CARE-ak”, but I answer to any variation on that theme.  I’m originally from east-central Alberta but am now based out of Edmonton, Alberta.  I am currently promoting my upcoming single/sophomore album “This Road Is Mine”.  The album is actually what I’m calling a “mixtape” or “playlist” as it is a collection of singles that have been made available for streaming and download over the past year covering a wide range of styles and influences.  There will even be a limited number of cassettes of the album available online and at shows!

Well, I’ve been told that my music is a cross between Keith Urban and Vince Gill…or was it Vince Neil?  Maybe all three?  But, yeah, I am definitely a new country artist.  I think anyone that hears my music will be able to hear my influences live and on my recordings.  I’m shaped by the sounds of my childhood from the contemporary folk world (Marc Cohn, Shawn Colvin) and neo-traditional country (Lee Roy Parnell, Mary-Chapin Carpenter), as well as California country-rock (Little Feat, Linda Ronstadt).  I write or co-write all of my music so it always has to resonate with me in some way lyrically with just an acoustic guitar, even if the songs aren’t necessarily autobiographical.

I have a bunch of shows over the next few months in Alberta, including the Ponoka Stampede in June, and a Mixtape Release Event in support of Music Heals Canada in Edmonton in March.  My live performances are a case-by-case experience depending on the venue and crowd.  The guys that I’m lucky enough to play with me live are top-notch, so we definitely drift into some interesting territory with our covers.  I’m quite proud of our Bellamy Brothers / Ozzy Osbourne “Redneck Girl / Crazy Train” mash-up as well as our psychedelic breakdown in Jason Aldean’s “Hicktown” (I’m not kidding).  But, for the most part, we keep a straight-up mix of new and old country and pop and rock covers that compliment my original material.

Without question, it is the new single “This Road Is Mine.”  I wrote this with Clayton Bellamy and Mike Little.  Clay and I grew up in the same area of Alberta but didn’t know each other that well until the past few years.  We drew upon our experiences growing up out there and how our music has taken us all over the world in different directions.  This song encompasses almost everything that I am about musically…including name-dropping Canadian icon Charlie Major (“…mixtape in the stereo, Charlie Major on full blast…”)!

Aw, wow, OK, this list could go on and on so I’ll whittle it down for the readers.  My first has to be the Road Hammers.  I’m so proud of them for releasing their cover of Dawes’ “All Your Favourite Bands”.  Clay’s vocal on it is killer!  And the slide?  C’mon!  Another is definitely Leaving Thomas.  Annika is one of the best new performers out there, and the dynamic between she and Bryton is really cool to see and hear.  And I definitely have to give a shout-out to Our Lady Peace.  The new EP is as good as anything they’ve done.  Raine is one of my favourite writers and live performers.

Share this:
Related ItemsACMAAlbertaAlberta MusiccountryInterviewKarac HendriksThe Road Is Mine
← Previous Story Interview with Jesse Slack Plus Behind The Scenes Music Video Footage
Next Story → Five Questions With Kayobe