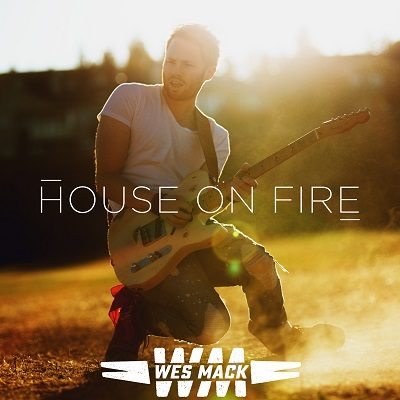 On January 12, 2018, Alberta native and top 10 Country artist, Wes Mack, released his new single “House On Fire” via iTunes and Spotify. Produced by Jordan Orbek and co-written by Donny Anderson and Murray Daigle this tune combines Mack’s memorable vocals with an infectious, upbeat chorus coupled with his signature pop/country twang. The single also hit Canadian Country radio this month and is accompanied by a new (self directed) music video. Mack is no stranger to video directing and has received multiple CCMA nominations for Video Director of the Year.

“Songwriting and playing live have always been at my core. The release of my first album changed my life and to follow it up the last thing I wanted to do was rush out a bunch of tracks just to get it done. So, I wrote just over 60 songs to find what I wanted: something that was made to be played live. I owe a great deal in life to my fans and I wanted to get this right. I’m tremendously proud of what we put together. 2018 is gonna be a wild ride,” said Mack.

The 2013 CCMA Discovery Award winner’s debut album, Edge Of The Storm, generated four top 20 singles (two were top 10 radio hits: “Duet” and “Before You Drive Me Crazy”) and nine CCMA nominations, including Album Of The Year. Mack also toured with Shania Twain as her only opening act on the Canadian dates of her farewell tour (18 sold out arenas). Each night they performed her hit “Party For Two” as a duet. Mack has also toured extensively and shared billings with Florida Georgia Line, Eric Church, Dierks Bentley, Miranda Lambert, Thomas Rhett, Jess Moskaluke, Dallas Smith, Brett Kissel, Bobby Wills and many more.

In preparation for the new album, Mack wrote over 60 songs and recorded 36 demos before entering studios to cut the final tracks with long-time friend and Producer Jordan Orbek. Over his career Mack has proven himself to be a prolific songwriter, writing hundreds of songs including both of his top 10 singles: Duet and Before You Drive Me Crazy. While working on his upcoming album he wrote with veteran songwriters in Nashville and abroad including: Deric Ruttan (Blake Shelton, Dierks Bentley, Eric Church), Gordie Sampson (Carrie Underwood, Keith Urban, Miranda Lambert, Rascal Flatts), Jay Joyce (Eric Church, Little Big Town, The Brothers Osbourne), Marv Green (Eric Church, Tim McGraw, Lonestar, Faith Hill, George Strait) and many others.

While carving out his path as a musician, Mack has also chosen yet another form in which to create: as an actor. His resume has grown to include work on the television shows: Heartland, Smallville, Supernatural, The 100, Continuum, The Vampire Diaries, and Motive. He has also taken on roles in films: Power Rangers, Magic Beyond Words: The JK Rowling Story, A Dog Named Christmas, The Phantoms and, in the upcoming Liam Neeson picture, Hard Powder.