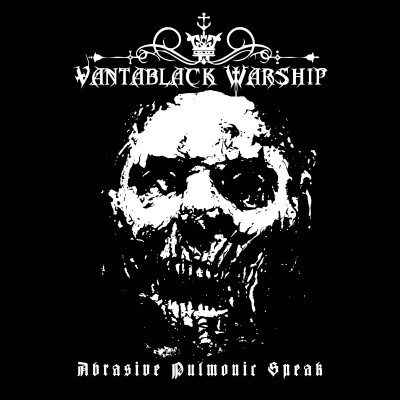 Vantablack Warship, hailing from Montreal, QC has released their new album Abrasive Pulmonic Speak. The album is a follow up to their 2015 self-titled EP and features eight tracks relaying a different story on each. If you’re a fan of anything from Municipal Waste to Suicidal Tendencies or Cancer Bats to Slayer, there is something here for you.

The first single “Another Dead Rockstar” can be heard in this teaser. The song kicks off with a hardcore lyrical style before the instrumental kick in. The band has mentioned Cancer Bats as an influence, and the track is definitely a great example of it. Though not to be taken seriously, it’s said that the album was written about washed up musicians still chasing the dream, but in the end, sowing a path of disrepute and shame. From the harsh vocals to the lower guitar tones, this track opens the album to a smashing great start.

The second single “Blood on the Mat” is mentioned to be about women in the UFC. Opening with a hardcore-punk feeling, this track will have you head-banging instantly. Unlike “Another Dead Rockstar” this track has a much more fast-paced guitar and overall tone. Showing the diversity the album has, and that each song should be focused on individually versus listening to the album as a whole as each track has its own story to tell.

Abrasive Pulmonic Speak is not only the name of the album but also a title of a track on the release. Guitarist, Pat Gordon comments “Abrasive Pulmonic Speak”, the title of our album is a testimony to the harshness of our lyrics and music. They are pretty hardcore! But it also refers to the title track, which is based on the works of Henry Miller. He was expatriated for some of his earlier works that he put into print that at those times people never dared say out loud.  We are trying to channel that but from another an angle which is the stereotype that comes with metal music, which, quite frankly is tired. We have metalheads that are well into their 60s and 70s today. It’s annoying that people see us as a subculture when in fact we are a very legitimate culture.”

If you want a hard-hitting album with more than one theme, lots of variety and even more headbanging, don’t forget to pick up Abrasive Pulmonic Speak.