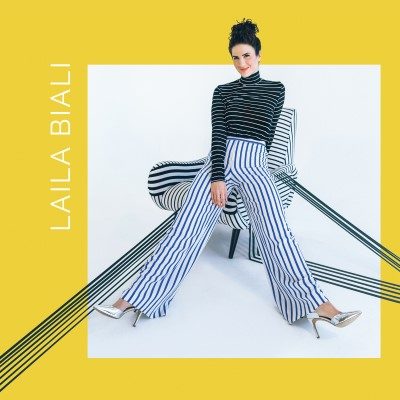 Laila Biali overflows with warmth on her seventh album, Laila Biali, alternating between moments of candle-lit sincerity and shoulder swaying passion. Her career-defining vocals and instrumental chops have long been established in Canadian Jazz realm; likewise, her vital compassion is contagious as a live performer, collaborator, recording artist, and now as the radio host of CBC’s Saturday Night Jazz. The album is a powerful continuation of the jazz-pop fusion she cultivated in 2014 with House of Many Rooms. Laila Biali finds her soaring in the ether between the two genre universes, interconnected by a tender trail of innovative piano figurations.

Biali has always had a knack for making covers that sound better than the originals. Her latest release is no exception. The tradition stems from her signature “request-o-matic” segments, where the audience requests covers from all genres to be played at her concerts. Whoever asked for “Yellow”, might just have some sort of otherworldly musical intuition (if not merely a love for Coldplay). Biali’s trio offers a rendition that’s almost unrecognizable- the harmonies in her transcendental piano intro are surreal and evocative, as though we’re standing, head-tilted in an open field, watching the stars blink against an indigo sky. What is familiar, are the lyrics, which Biali projects with clarity and poignancy.

Her voice is perplexingly apt with the thematic and instrumental intricacies of her deeply heartfelt arrangements and songwriting. On “Wind”, the vocals become part of a magnificent vision, blended into climactic, three-dimensional strokes of piano, trumpet, and drums as she repeats the words “today is such a day”. When it ends, she’s definitely not the only one in awe.

For those who fell in love with her more customary jazz music first, tracks like “Queen of Hearts” boast a hypnotic bass line, kept light by congas and occasionally, organ, for nuance and excitement, as she sings “He’s mine for the first time”.

Laila Biali is mesmeric from start to finish, whether it’s through swing or performing intimacy. Biali is wholly invested in all twelve tracks, where she outwardly yearns and swells, as though everything she feels in the music is buzzing in the world around her. On this album, she’s reached an apex, and has the full, open heart to stay there, indefinitely.