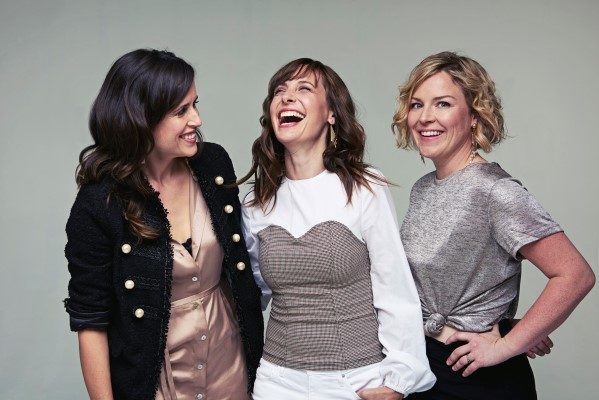 Listening to Toronto’s Good Lovelies, you can’t help, but feel all the things; joy for love, heartbreak for loss, excitement for life. It’s important to note, too, that these aren’t the expressions of anyone, but Kerri Ough, Sue Passmore, and Caroline Brooks themselves. They share their experiences to connect with the listener in a way that many artists are missing these days. It’s that realness that not only makes you want to put them on repeat but also sit down with them for a coffee. Take some time out of your busy day to check out the video for their single, “When We Were Young” below.

Coming up on the release of your newest album, Shapeshifters, in February 2018, what’s your favourite part of releasing and promoting new music?

My favourite part of releasing and promoting a new album is taking the songs from the studio to the stage. Adapting them to our stage show, which is the primary way we connect to our audience, is a long but exciting process.

In the case of “Shapeshifters”, we’re all learning to play new instruments or to use the ones we know in new ways. I’ve just bought a baritone guitar, which we used a lot on the record – and I’m super excited about spending time understanding the instrument and then presenting it onstage.

Your video for “I See Gold” (the first single from the new album) takes the viewer down into the valleys and up into the mountains of emotions of your four main characters…in such a beautifully touching way. Where was the concept born from?

The concept for the video came from Matt Barnett at Brought to You By. We had been discussing the idea of universality in the messaging of that song – of the daily grind and of being able to “see gold” in the midst of difficult times.

“I See Gold” is not about one person in particular, and I really liked the idea of not being in the video. We cast an incredible group of actors who really delivered some beautiful performances.

Matt and the whole BTYB team also did a fantastic job capturing a range of emotions and staying true to the spirit of the song. It all worked out beautifully!

You’ve had the chance to play all over the place; across Canada, the US, Germany, Scotland and England, to name a few! Where’s somewhere you dream of “breaking through”?

Hard to say! If we could be super famous in say, California, that would be nice. We could play all our shows in the most beautiful climate and then go home and hibernate in Ontario/Newfoundland during off-tour times. If every show also included flights and meals for our families, we’d be set. This sounds amazing. I like this plan. Let’s make this happen.

You celebrated 10 years since your first performance together just last year. Countless live shows, four albums, two EP’s, a live album and a Christmas collection later, what would you say has stayed a constant in the group through it all?

At the core of everything we do is a deep friendship. We are lucky to have found each other and to be business partners. You can imagine that brings much complexity to our relationships with one another, but we really are in each others’ court. Always.

Our friendship and love for one another come before the band, which oddly has made the band stand the test of time (11 years and over 900 shows!). That’s because, in the end, we chose each other over everything else.

You’re no stranger to awards having won a Juno as well as four Canadian Folk Music Awards. Who are the first people you HAVE to call after accepting an award?

Our parents. Then our husbands. HA!

Well, first we hit the West Coast later this month – playing in Washington state and British Columbia in our new setup where we’re touring with our regular bassist Steve Zsirai and with drummer Mark Mariash for the first time!

From there we will release Shapeshifters with shows across Canada, the US and Australia. We look forward to playing and collaborating with friends at festivals this coming summer!

We’re also already preparing for next year’s Christmas tour, which we do each year to celebrate our band’s beginning way back in December 2006.  Always in motion, and so grateful for this crazy joyful life.