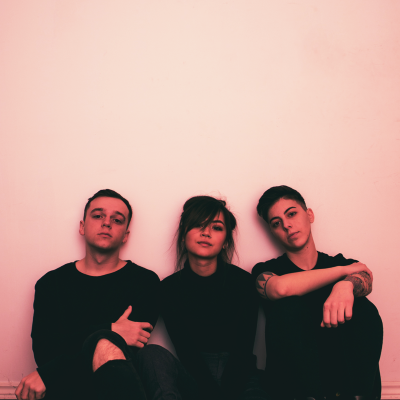 Emerging from just north of Toronto, Canada, Arbors Lane is a three-piece pop rock band consisting of lead vocalist Jenny Palacios, guitarist Nick Martin and drummer Cristina Campitelli. All having met in their teens through music forums and local shows, Palacios, Martin and Campitelli have put countless hours in to create an experience from the ground up; one that is meaningful not only to them but for listeners as well. From writing music in basements to local shows to closing festivals, Arbors Lane has come a long way with intent to go as far as possible. Now it’s time to check out their new single, “Shiver” and find out more about them via our segment of Five Questions With.

We are Arbors Lane, from Toronto, Ontario. Cristina, our beloved drummer, started this whole thing back in high school and found me, Jenny, I sing J. And eventually we stumbled on Nick, our beloved guitarist. And we’ve been happily married ever since.

In a review we got for our last EP, Prologue, Alex Lane, the person who wrote the review said “Think Sum 41’s Does This Look Infected as produced by Paramore’s Hayley Williams, if Hayley Williams was a councillor.” And it still stands as the most flattering way anyone’s ever described us.

It’s definitely hard for a lot of artists to find which genre describes them best, and we’re also moving in a direction different from how we started but I think our sound has floated around an alternative rock/pop rock vibe from the get go; some songs closer to that and some way beyond that.

We just want to make music that comes from an honest place, so if whatever we’re going through and whatever we’re vibing to just comes out, it comes out, and we stick with it. That way, I think if we can relate to it, other people can too.

We do our best to bring just good energy, and it gets pretty intense a lot of the time. Not in an uncomfortable way, but we try to create a space where you can cry and also jump around two minutes later. It’s a fun time, with emotions and guitar riffs all over the place.

We’re currently focused on writing and really getting something out that there we’re super down with and proud of, so we’re taking a bit of a break from shows just for now.

That’s hard because for every collection of songs we’ve put out so far, there’s at least one defining song that really emulates all of Arbors Lane. If we had to answer a few weeks ago, I’d say either Something Left off of Prologue, or Down The Line. Which is weird cause they’re both pretty different in sound, but if you know the songs and know us, they’re just very…Arbors Lane-y.

But now, I’d definitely have to suggest the new single, Shiver. It encompasses a sound that’s closer to who we are now, and the kind of direction we are stoked about heading in.

There are so many Canadian artists killing it right now, and a lot of friends of ours are included in that mix but in my own opinion, Majid Jordan made some sick releases in the past year or so that I’m still not over. Unanimously though, we’re probably always ready to jam Let Go + Under My Skin by Avril Lavigne.