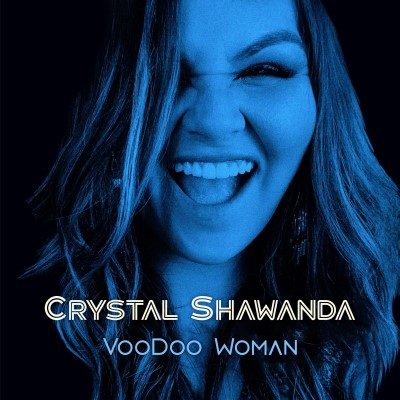 Crystal Shawanda has officially announced the release of her latest blues influenced studio album, VooDo Woman. Released as part of a “soft launch” in October 2017, VooDoo Woman is now available through most major music retailers and streaming services. As an emerging Canadian artist, Shawanda first appeared on the music scene when her 2008 debut single “You Can Let Go,” shot up the charts and introduced her to the world of country music. Shawanda made an instant name for herself with her sharp songwriting skills and powerful live performances. Over the years Shawanda has shared a stage with artists ranging from Loretta Lynn and Reba McEntire, and even performed on the Grand Ole Opry. Almost a decade later and no sign of slowing down, Shawanda now wears many hats including mother, wife, daughter, producer, songwriter, and artist (to name just a handful.) Despite making a debut in country music, Shawanda has never been contained and bound by generic music labels. Pushing the boundaries of genre and musical development Shawanda has branched out as a bonafide blues artist only to add to her already impressive musical skills.

Shawanda first officially dabbled into the world of blues in September 2014 when she released her album, The Whole World’s Got the Blues. Since then we have seen the follow-up release of October 2016’s critically acclaimed album Fish Out of Water, and now VooDoo Woman. With the two previous albums heavily focused on original material, Shawanda still had a burning desire to strongly showcase just how much she adores and is influenced by some of the most timeless blues songs ever written. Celebrating songs such as “Misty Blue” which was made famous by Dorothy Moore, and the Etta James classic “I’d Rather Go Blind” Shawanda does not disappoint the listener.

VooDoo Woman is a direct love letter to the songs and blues style that Shawanda grew up with and loves to perform right alongside her country music roots. From the album’s title track “Voodoo Woman” to the showstopper “I’d Rather Go Blind” you can hear throughout the album the raw and real passion that Shawanda hits each belted note with. Vocally Shawanda is in a league of her own on this album. Shawanda tackles some huge mega-hits and makes them entirely her own, both with the arrangements created by Shawanda and her husband/producer/musical collaborator Dewayne Strobel. Listening to VooDoo Woman is a strong breath of fresh air, and where Shawanda shed’s all titles and embraces her voice on each track.

VooDoo Woman is a solid blues album from Shawanda. Those who may have doubted this young woman could be anything more than a country artist were seriously mistaken. Talent has no label when it comes to performing with such emotion in the way Shawanda always does. The album is packed with standout vocal and musical performances. Some of my favourite tracks on this album include; “Misty Blue,”  “Trouble,” “I’ll Always Love You,” “Hound Dog,” “Voodoo Woman,” and “Cry Out For More.” Shawanda and her team pull off an album with a sound that is real, honest, and pay respect to the days gone by. Country or blues, I strongly recommend adding this to your playlists and music library.