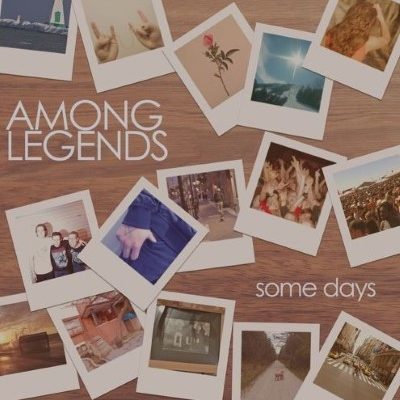 To touch upon an over-used expression on expectations, perception, and natural inclinations, “good things come in small packages” is a concise, albeit clichéd, description of Waterloo-based Among Legend’s new EP Some Days.  Clocking in 8 minutes 46 seconds over three tracks, Among Legends is not here to false posture or waste time.

The record opens with a distorted, slightly jangled Social Distortion influenced guitar intro on “February 1st” before kicking into a Greg Graffin vocal delivery with a mix of Bad Religion production over a NOFX push, the Portmans drive, and an Against Me! vibe.

“Sit back and Wait” is closer to a Blink 182 pop-punk sound, with their signature hooky riffs, while retaining the Bad Religion delivery and aesthetic with their rhythmic chugging and third act break down, including solo bass riff and sustained guitar.  Big gang vocals give a Dropkick Murphy’s ready to enter battle rally cry.  Of course, it is an emotional psyche battle, not a physical one, but it still counts.

“My Heart’s At Home” is Dinosaur Jr. and Pavement writing a song for Social Distortion with its steady rock drive and strong vocal melody, arranged by Weezer.   The early 90s bass distortion creates a classic tone to this tune, giving these young punks ageing cred.

Among Legends self -define as pop punk but there is more of a classic, 80s punk vibe with elements of combined with pop-punk, a style that has a West Coast punk / rock vibe while retaining a lightness and joy to the music, punk for positive people, as they say in their bio, “for fans who don’t want to be sad anymore.”

Sincerity is evident throughout Some Days, this is a band who enjoys, believes, and commits to what they do.  These tracks are not trying to fit in by being something they are not, the twelve-year-old kid who starts smoking behind the school hill to be “cool”, they are just themselves, like it or leave it.

And there’s nothing here not to like, so go check it!

**Bonus Track:  A tidbit of free advice from someone who has created, edited and waded through many an EPK, and one sheet, in his time.

On a personal and professional level, it was nice to have an accessible EPK to download from Among Legend’s website.  That being said, it is a good idea to link, or send your EPK, with your initial press release so reviewers or writers, such as myself, do not have to search for further bio info.

Also, include a list of band members on your EPK, a touch of recognition I like to include in my reviews. I understand it may be on your Facebook page but, as I jokingly stated, but seriously meant in a previous review, “if it isn’t in your press kit it’s not worth knowing now, is it?”

To end on a boisterous Canadian noir-punk allusion to Zelda Belladonna, “You’re Welcome!”