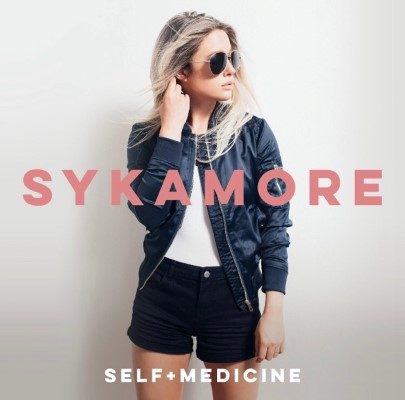 Sykamore just released her latest EP, Self + Medicine. The six song EP is available now and features the lead single “Better Half,” which made its debut in the spring of 2017. “Better Half” has been receiving strong responses from radio and media and has built up the anticipation of this latest music release. Sykamore has spent the better part of the past few years travelling, performing, and cultivating her career. Having the opportunity to share the stage with some of Canada’s best including; Paul Brandt, Tebey, MacKenzie Porter, Lindi Ortega, and Adam Cohen has allowed Sykamore to develop her artistry and expand her audience.

Born in Carseland, Alberta creating music has always been a huge part of who Sykamore is. Pursuing a career in music just came naturally and eventually lead to her debut album Petal being released in July 2013. Since then Sykamore has had her songs featured on the TV show Heartland, and she was nominated for the Canadian Country Music Association Discovery Award in 2015. Sykamore also more recently just signed on with Nashville’s Home Team Publishing after being discovered by one of the company’s founders, Rhett Akins.

Self + Medicine opens with the track “We Were Alright.” Sykamore’s vocals are smooth and sweet and are only complimented by her delicate arrangements, throughout the EP. “We Were Alright” is a haunting tune where the lyrics are reminiscent of those strong feelings you have about a relationship after it has ended and trying to hang on and move forward. “Playing the Fool” was one of my instant favourites on the EP. I loved the tempo and elements that Sykamore used to bring her songs to life. “Hayloft” and the lead single “Better Half” keep the EP going strong before “Houseboat” and “Dance Card” wrap it up.

Self + Medicine is a strong release from this young Canadian artist. Developing her style and vocal ability, you can hear Sykamore is passionate about her music. Her songs have heart and soul. We look forward to more music and keeping up with this Canadian country artist.