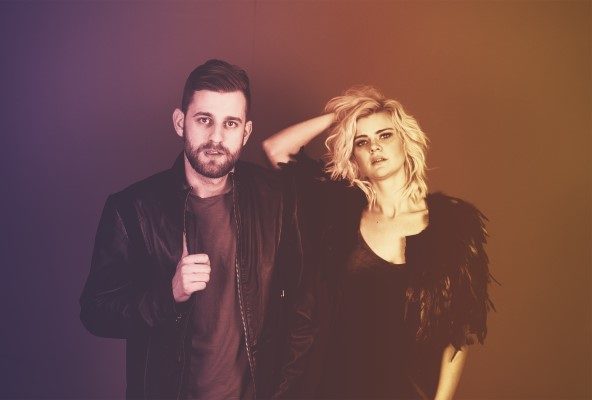 The connection between Leaving Thomas‘ Annika Odegard and Bryton Udy is obvious from the first note of their debut self-titled EP. Not only does this work on a musical level, but their friendship & hilarious antics (as shown in The LT Show on YouTube) give the listener/viewer even more reasons to want to learn more about the duo’s journey and where they’ll go from here.

“Blame it on the Neon”, the lead single off of your upcoming EP, has an amazing groove to it and is escalated even further with the (hilarious) video! When it comes to the video creation process, how hands-on do you like to be?

We love being involved with everything related to “Leaving Thomas”! The idea for the video came to us after hearing the final produced version of the song and brainstorming ways to make the video tell a story.  The song is quite sexy and cool and we are, well…not really sexy and/or cool. So, we decided to put our own spin on it and highlight our personalities.  It has been wonderful to see that the video has been received so well by fans and friends in the music industry!  We were involved with each step from the initial concept idea, to hiring a director, helping direct on set, and aiding in the editing process.  We loved every minute of it!

The EP as a whole takes the listener through the peaks and valleys of emotions; the independence of running solo, the passion of love and the ache of loss & regret. When writing for the new release, how much was done individually vs. sitting down and crafting a song together?

Both Bryton and I wrote on every song on this album so we both feel connected to each song!  As friends, we often discuss our lives with each other.  Through heartbreak, adventure, and loss, we have been there for each other as friends as well as musical partners.  We love writing together and are thankful we had great co-writers both in Calgary and Nashville to collaborate with!

Since you’re still based in Calgary, some of the EP was written there, but also in Nashville! When was your first visit to the Country Music Mecca and what was your first impression? Would you ever consider moving there full-time?

We love Nashville!  Our first trip was in February of 2015 and we fell in love with the city.  We wrote a great deal by ourselves, but we also wrote with Fred Wilhelm, a very accomplished writer who we both admired.  Although we love Calgary, we are certainly excited to see that we have been featured on major US outlets such as Sirius XM “The Highway” and CMT US and are interested in exploring that market!

Included in your upcoming live dates is the Big Valley Jamboree in your home province of Alberta! Besides the insane line-up that you fit so well into (Thomas Rhett, Florida Georgia Line, Paul Brandt, Jass Moskaluke & more), what are you most looking forward to?

We are very excited to be performing on the main stage this year at one of our favourite summer music festivals!  We had a blast performing at the Beer Gardens last year, but it is exciting to see that after an amazing year, we are now on the main stage!

You’ve known each other since back in the early 2000’s and reunited in 2012 to start making music together, though were named one of the “12 Emerging Artists to Watch in 2018” in our recent post. What do you think it is that’s making more people sit up and listen now?

We have spent the last three years working hard to make sure that audiences and industry folk alike get to know us in a real and authentic way.  We love sharing our story as a duo beyond music.  Our weekly “LT Show” has been a great way to let fans get to know us better, and it’s exciting to see that people are becoming more and more interested in learning more about who we are.

We have our big EP release show on Thursday, Jan. 25th at the palace theatre in Calgary, AB!  We are looking forward to performing for longtime fans and new ones as well!  Once the EP comes out, we are looking forward to performing the songs live!  We’re also gearing up for the summer festival circuit which is always a blast.  We can’t wait to be in the same lineup as our friends, other Canadian artists, and international artists that we admire.