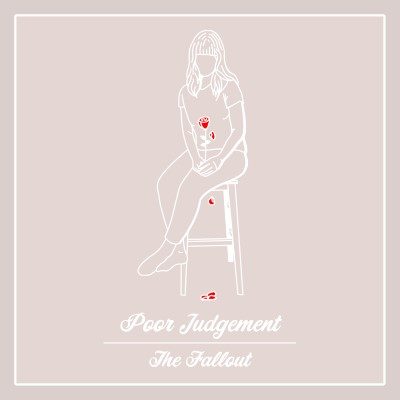 Opening with the crunching chords of “Running In Circles”, the album starts off with a bang by opening with one of the hardest rocking songs on the album.  The sound is driven by power chords, palm muted chugging and semi-rapped vocals creating a song that is both fun and exciting.  Quite similarly, “Disarray” follows a similar form but feels a touch darker and heavier while the closing track, “Bittersweet”, uses a similar energy while also embracing a sense of spaciousness, making it among the strongest on the record.

While the fast-paced songs are good, Poor Judgement flex their songwriting skills on “Love Is Blinding Me” and “A Month Ago”.  The songs both slow things down and, for the most part, ditch the power chords in favour of ambient guitars.  The latter of the two is especially impressive as it builds from a melancholic ballad to a frustrated headbanger in a manner that demonstrates excellent songwriting along with a raw sense of energy that brings the song alive.

While they don’t bring anything new or unexpected to pop punk, Poor Judgement delivers a fun first record.  The Fallout is a straight shooter and gives the listener a solid idea as to what the band is all about, making it a very fun record.