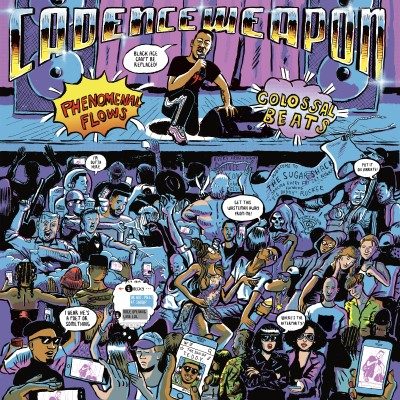 Cadence Weapon, AKA Rollie Pemberton, projects his new artistic persona with relentless experimentation and head-up hustle on his self-titled fourth album. He’s a rapper, producer, music journalist, and in 2009 was named Poet Laureate in Edmonton- his hometown, and a city where his family has a patriarchal history of prestige. In a recent interview with CBC’s Tom Power, he refers to their accomplishments as “black excellence”— his late father was the inaugural hip-hop radio DJ Teddy Pemberton; his grandfather, CFLer Rollie Miles of the Edmonton Eskimos. One can imagine that this high profile family naturally generates steep expectations and an inevitable sense of responsibility.  On Cadence Weapon, Pemberton flourishes, delving into original subject matters and striking beats as he shoots for stratospheric fruition.

In his pursuit of authenticity, Pemberton refuses to identify as a Toronto hip-hop artist. His music diverges from OVO Sounds’ atmospheric crooners and the city’s stylistic heartbreak anthems from people like The Weeknd and Tory Lanez.  Simultaneously, Cadence Weapon rejects the emergence of trends like emo-rap, fuelling personal expression and promoting courage instead of revelling in anguish and self-torment. He fulfils this with self-assurance, and in a way that needs not rely on the socially destructive hypermasculinity of pioneering rap greats.

He honours noteworthy traditions from the genres previous eras when discussing the impediments of racial prejudice. Songs like the declamatory “Destination” address this upfront- the lyrics “once the people see my face/all they see is race/look at me with distaste/and they make haste” are outlined by a slick, jazz-influenced melodic backdrop. Cadence Weapon is emotionally and thematically thorough, and Pemberton boasts personal responses to the very issues he explores. “Own This” opens with a sample of his dad saying “If I don’t get you, my son will” live on CJSR radio, from back in the day. This somewhat prophetic comment unfolds as Pemberton claims his own rebirth and hegemony.

On “High Rise”, he reflects on his unideal experience looking for a place to rent in Toronto, experiences that were often propelled by skin colour stereotyping and discrimination. It’s the most inventive track of the album; the lyrics lend themselves well as statements on present-day gentrification and the housing crisis in several major cities. A sarcastic excitement over condominiums is driven by a synthesis of ideas that flash like pop art- overly saturated colours and onomatopoeic text. The track’s genius lies in the multi-layered lyrics and refined production that emphasizes bold, sound effect-like gestures of irony.

Cadence Weapon arrives in a timely fashion, capitalizing on topics relevant to a spectrum of audiences while effortlessly responding to critics of Canada’s (primarily Toronto’s) stagnating hip-hop scene. Through this, Pemberton initiates new considerations of what rap music in 2018 can, and should be.