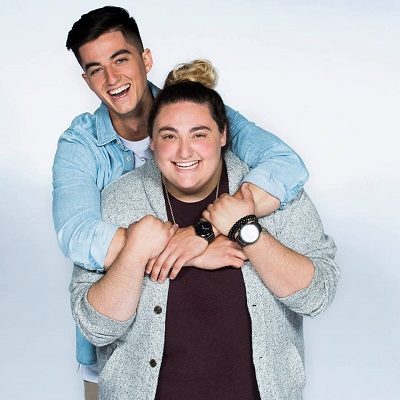 On Wednesday January 17, 2018, Elijah Woods x Jamie Fine were revealed as Week 2 winners of CTV’s The Launch. The duo from Ottawa, ON, with their stripped down style of a pop/jazz/hip-hop/R&B sound, captivated the mentors – Scott Borchetta (founder of Big Machine Label Group, Taylor Swift), Ryan Tedder (front man for One Republic, songwriter/producer) and Jennifer Nettles (Sugarland).

The duo recorded the week’s new original single, “Ain’t Easy” (demo version written by Ryan Tedder, Zach Skelton, Camila Cabello), which by Thursday morning had hit the #1 position on the iTunes Canadian Songs Chart. During the recording process of this song and the input put forth by Woods and Fine, the two have now been added to the writing credits.

“Ain’t Easy” was immediately released across the country following Wednesday’s broadcast and simultaneously launching on radio stations across the country. The single is also available to buy and stream everywhere, including iHeartRadio, Apple Music, iTunes, Spotify, and Google Play.

Elijah Woods x Jamie Fine went up against J.P. Maurice, Liteyears, Divine Lightbody and Basil Phoenix to be one of two artists picked to record “Ain’t Easy”. Phoenix was the other artist picked. An honourable mention was made to Maurice for his vocal and songwriting abilities.

About Elijah Woods x Jamie Fine
The “x” in Elijah Woods x Jamie Fine is pronounced “and,” but it could also be said to represent the multiplying effect the two artists have on one another. When Elijah (instrumentalist/composer) and Jamie (lyricist/vocalist) put their passions together, the possibilities are endless. Jamie admits to being the more emotional of the two, and is well aware of how Elijah’s focus provides the counterbalance needed to stay on course. Their partnership began when Elijah heard Jamie’s soulful vocals on a track recorded by a friend. Four days later, the two were together in his studio. Elijah and Jamie use their bond, and musical multiplication effect to continue to grow their passion.

In each hour-long episode, headed by music mogul Scott Borchetta, a group of unsigned emerging artists are mentored in the creation of a new original song by a panel of internationally renowned hit makers and mentors – from discovery to stardom in just two days.