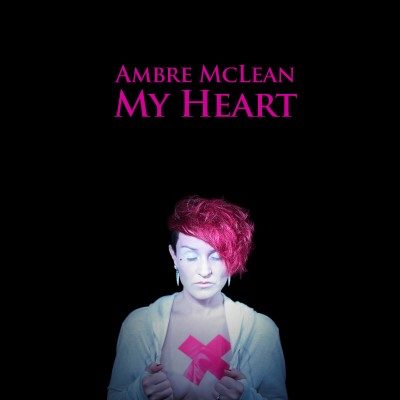 Ambre McLean, a singer-songwriting hailing from Kitchener, Ontario, released her much anticipated 5th studio album entitled My Heart in November 2017.

McLean is definitely not new to the music scene. After years of performing with bands such as Kyn and Sharon Said, Ambre started a new adventure and released her debut solo EP Just Passing Through in 2004. This EP allowed her to showcase her ever-evolving talents. With the recent release of her 5th album, McLean continues to carve her own musical journey with the genre-defying style and indie approach. My Heart has been described as bringing us a “stripped down and raw record, rife with sincere and sometimes bone-chilling performances – all tied together by McLean’s unique musicianship and breathtaking voice.”

The album begins with an acapella song “Morning Lullaby”. Along with McLean’s soulful sounds, effects are placed on the word ‘umm’, as it is repeated to create the melody for this song. A creative and intriguing way to start the album, leaving the listener intrigued and wondering what they will hear next.

The second song, “Me, My Heart, and the Moon”, is a polar opposite of “Morning Lullaby”. It starts with the catchy beat created through the use of various percussion at the forefront, accompanied by a guitar. You definitely cannot help but bop along as you listen.

“Poster” was released as the first single from the album. This song is filled with raw emotion sang straight from the heart. She sings about loving someone and how this impacts your life, causing everything you once knew to change. It is definitely one of my favourite songs on the album.

“Nicole’s Heart” really stood out to me. This song, simply composed of a piano melody and raw, emotional vocals that sang heartfelt lyrics. It is a song that most of us can relate to, as McLean sings about the changes one may encounter in their lives and what impact this may leave.

“I Can Tell” is another song that you cannot help but move along to as you listen. This song is saturated with positivity, through both lyrics and melody. Channeling her creativity once more, the repetition of the lyrics “I can tell that we are going to fall in love” is like a mantra. The more you repeat it, the more it becomes a part of you.

The album concludes with “Till the World is Silent”. This song begins with a sound that reminds me of the static you hear when trying to find something on the radio but there is no signal. One of the things that I noticed first was the addition of another set of vocals. The song starts off on a simpler, more quiet path before it builds up intensity during the chorus. From this, it continues to get quieter and quieter until there is silence!

My Heart is definitely an album that you need in your life! McLean’s captivating voice keeps the listeners wanting to hear more. There were no fancy bells and whistles used in her melodies, just stripped down instrumentation to allow focus on her heartfelt lyrics. “It is a sonic and lyrical exploration of all the things we feel most in our hearts – from the simplest joys to the elation of love, to the pain of loss, and all things in between.” So what are you waiting for? Go check it out!