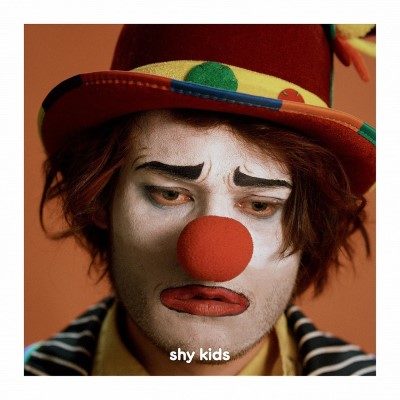 Toronto’s shy kids released their brand new single, “i feel like a failure” today. The single is from their upcoming sophomore album, in a state which is set for release on February 23 via Culvert Music. When asked about the single, the guys stated,

“Dorks and losers, kings and clowns, everyone feels like a failure sometimes. This song goes well with spilled milk, untied shoes, baths with toasters, and we give anyone permission to use it in your fail compilations.”

We had a chat with the band, so check out what they had to say below along with their brand new video.

Tell us a little bit about yourselves.

we are a band of filmmakers from Toronto.

Where do you get your inspiration for songwriting?

songwriting can be as diverse as a pet, a heartbreak, or a pet who breaks your heart. for our new release, “in a state” the songwriting was mainly inspired by having to travel through America. What it felt like trying to ingratiate ourselves into the popular consciousness, after making a short film that went viral.

You have just released a new single called “the middle”, tell us a little bit about the track.

Matt came back from a vacation on salt spring island and said he wrote a song about his chickens he has out there. the song had this kinda western strut and we thought it almost too divergent from our normal sound. it was at this time that the US elections were heating up and the lyrics soon followed. we wanted to make a song for people who were in the middle (politically, geographically, and morally) and felt that this little diddy suited the mood perfectly.

shy kids are known for visually appealing and insanely creative videos, tell us about the concept for the video for “the middle”.

we made a visual album for “in a state” with each song having its own music video. we can’t wait to show the rest of those videos but the middle, in particular, was our attempt at being simple. we wanted something that was just a portrait of what we admire about middle-class life. country fairs, pie eating contests, blue ribbon pigs. we just wanted something simple and pure, much like the song.

Care to tell us a bit about your brand new video, for “i feel like a failure”?

The video for “i feel like a failure” has weird origins. when listening to the song we kept seeing this clown messing up at everything he did. clowns are the ultimate failures, cause it feels like there one job is to be funny and I’ve never laughed at a clown. we decided to have Matt play the clown (cause he sang the song) but his performance was definitely not a fail. we had a group of untrained actors for the kids and they kicked Matt in the balls and stomach on countless occasions. It was one of the best birthdays I’ve ever had.

In the world of viral videos, how important do you think it is to your music career that you stand out creatively in the music video department?

“Thriller” isn’t the best Michael Jackson song but one of the most iconic because of that video. We don’t need to be shy in saying that we’ve written fantastic songs, however, if no one hears them then what’s the point. Ultimately videos are a marketing tool but if we can make them something more, if we can put as much care, though, and work into the videos as we do the songwriting, we can really offer something unique. in a world where everyone has a music and film studio on their laptop, we want to take those opportunities and do something beautiful with them.

Tell us about your upcoming album release.

In a state is a visual album made completely by us (both songs and videos). It is a bit of a concept record that has us travel across the states (both geographically and mentally). It has a classic rock/vaudeville musical/sound to it. It feels like it’s our attempt at one of those classic rock concept album.

Besides the album’s release, what can we expect from shy kids in 2018?

Finally, stop being shy and play live. We also have some film projects that are gonna blow peoples brains out their skull.

Here at Canadian Beats, we like to include a “just for fun” portion to help your fans get to know you better. Ready!??

If you could collaborate with anyone, dead or alive, who would it be and why?

What are three things not music related that you can’t live without?