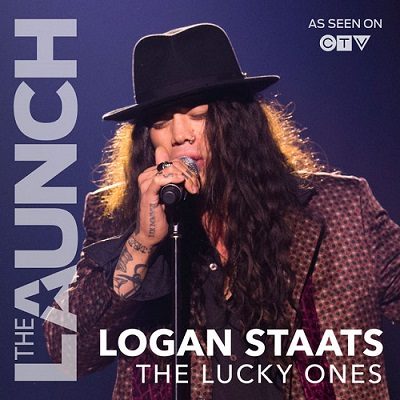 Logan Staats has had a whirlwind couple of days following his win on Wednesday night’s preimier of CTV’s The Launch. The 29 year old singer/songwriter from Six Nations Reserve, Grand River, Ontario can hold his head high with this honour. His single, “The Lucky Ones”, that was launched to iTunes following the show, hit #1 over night and, at posting two days later, is still holding the top spot.

Staats was one of five(5) acts competing for the launch, up against Havelin, Julia Tomlinson, The Revel Boys and Vivian Hicks. Two artists were picked to record and perform the new original tune (Staats and Hicks) and only one would be picked to launch. All under the mentorship of Scott Borchetta (founder of Big Machine Label Group, Taylor Swift), Shania Twain (top-selling country artist of all-time) and busbee (songwriter/producer: “Try” – P!nk, “My Church” – Maren Morris, ‘The Fighter” – Keith Urban and Carrie Underwood, and “Dark Side” – Kelly Clarkson)

This week’s chosen song, “The Lucky Ones”, was written by busbee, Bleta Rexha, Maureen McDonald, Justin Franks, Casper & B. The demo we heard on the show was very mainstream Pop. However, Staats version is a simpilfied soulful version that fits him and his style perfectly.

We, at Canadian Beats, were pleased to be able to talk to Staats by phone for this enlightning interview.

About Logan Staats:
Raised in Brantford, Ont., Logan Staats started writing and performing music in his teens, later becoming an award-winning artist. His haunting voice has provided opportunities to share the stage with acts such as Buffy Sainte-Marie, Keith Secola and Mumford and Sons. A product of passion and tireless musical commitment, Logan’s songs are truly his own. Armed with his guitar and harmonica, he has transitioned from the weekend bar circuit to playing sold out venues. His performances are animated by a level of self-possession, sadness, and joy created by an aura of inevitability. Logan is hell bent on raising the bar for Indigenous/mainstream crossover music.

In each hour-long episode, headed by music mogul Scott Borchetta, a group of unsigned emerging artists are mentored in the creation of a new original song by a panel of internationally renowned hit makers and mentors – from discovery to stardom in just two days.